Compare prices and find cheap car hire in Aberdeen from well-known and local car hire companies. Insurances and unlimited mileage are included. Save up to 70% on car rental in Aberdeen through us. 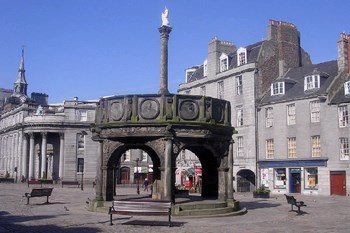 Aberdeen is located in Scotland– more specifically on the north-east coast – by the Dee and Don rivers.
Aberdeen has 217,000 inhabitants (2010), and is The country’s 3rd Division was the 10th largest city. The town has a large fishing port and is an important trading centre for the region.

The city is located the University of Aberdeen, which was founded in 1495 and is one of Scotland’s oldest universities.

Some popular tourist attractions in the city include: St. Machar’s Cathedral from 1530, the shopping street “Union Street” with its many shops, the Brig o’Balgownie bridge from 1320, the historical museum “The Marischal Museum” as well as aberdeen art gallery – with exhibitions of paintings and sculptures.

The city also has a maritime museum, theatres and concert venues, many beautiful parks and gardens as well as a varied nightlife offer.

There are good swimming opportunities in the summer in Aberdeen, and a little north of the city lies the city’s most popular sandy beach – which is 3 km long.

One of the many great parks in Aberdeen.

Aberdeen and the surrounding area are among the best European cities for those who like to explore on their own with car hire. Nature is beautiful, the road quite good, and with little traffic. You will probably both see and experience a lot on the drives. In what is known as the Highlands, there are many well-known sights, and the area is certainly worth a trip by. The same must be said of the many beautiful little fishing villages located along the coast north and northwest of Aberdeen. 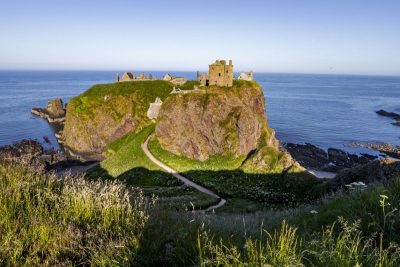 Dunnottar Castle is located on a cliff directly out towards the North Sea.

The ruins of dunnottar Fortress are just south of the small town of Stonehaven, just a short car ride from Aberdeen. The fortress is beautifully placed on a cliff protruding into the North Sea,providing optimum protection against invaders. The cliff has been fortified at least since the 13th century,but most of the ruins you see today are remnants from an extensive reconstruction that took place in the Middle Ages (circa 1580). Dunnottar is one of the most famous sights in the country. Thousands of tourists come here every year, and the partying is also known from the film Hamlet which was produced in 1990. The area is also known for a teeming bird life, and you can often see different whale species in the sea outside the fortress. 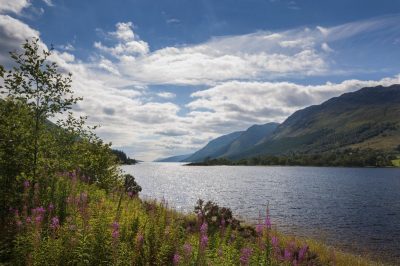 The famous lake where the sea monster Nessie supposedly lives.

The famous lake that reportedly houses Nessie, a myth that has been around for about 1,500 years, is located right next to the small town of Inverness. The lake is the second largest in the country, and is characterized by the fact that it is extremely long and narrow (56 kilometers at the longest). Along the water there are many pleasant and small villages, with inns and taverns accustomed to welcoming visitors. For example, stop by Drumnadrochit and see the sea monster’s own museum, or visit the ruins of 13th-century Urquhar Castle.

Balmoral Castle is located in the area called Royal Deeside, right inland from Aberdeen. This is one of the most popular rides for those visiting the city. Originally the residence of Sir William Drummond was located here (since the 1390s), but after the Royal Family bought the property in 1852, the castle you see today was built. Balmoral is considered one of Queen Elizabeth II’s preferred residences in the summer, and she visits the castle annually. In the area you will find pleasant inns, you can rent a cottage or take in venerable hotels, there are many nature trails here, and you can visit the castle itself and the castle garden,as long as the queen is not on a summer holiday there.

Crovie is one of Scotland’s most beautiful and picturesque fishing villages. The small community consists only of a small row of small houses, built at a time when boat was the only sensible means of transport in the area. The row of houses is sandwiched between the North Sea and the cliffs behind, and you have to park a short distance away, and then get a great walk down to the village. If you’ve seen the 1983 film Local Hero, you know what you’ll experience. The film was partly recorded in Crovie. It is possible to spend the night here in small inns,and in self-catering apartments in some of the houses. 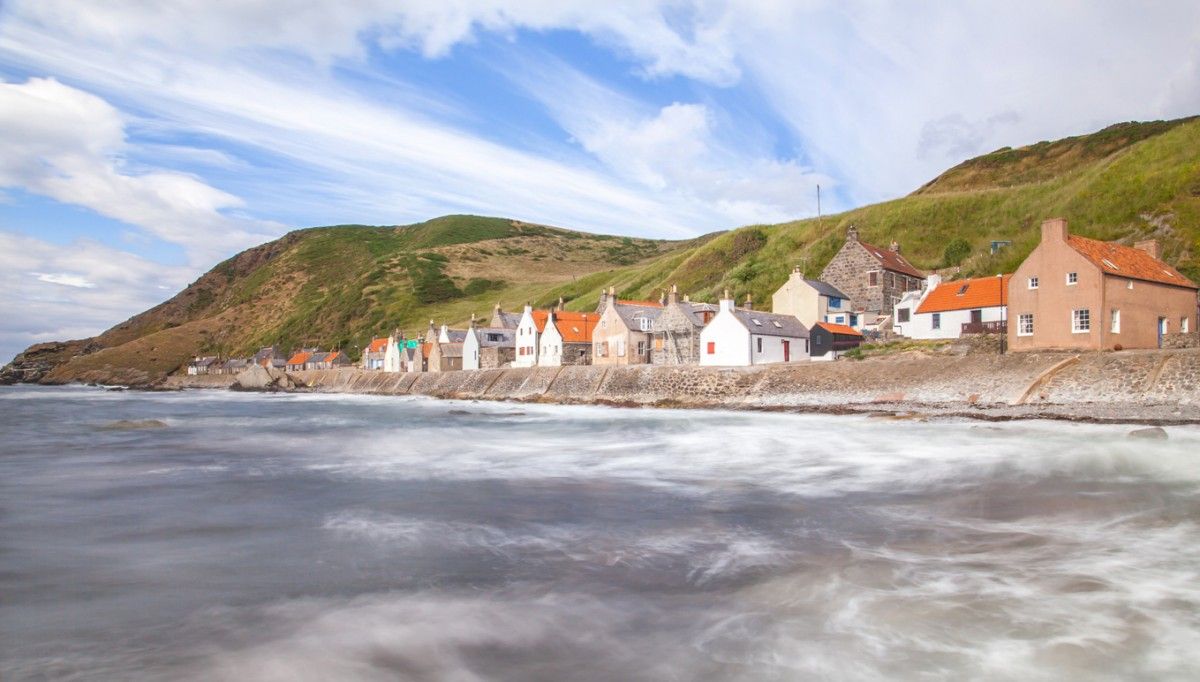 The small community consists of only a small row of small houses between the North Sea and the cliffs behind. 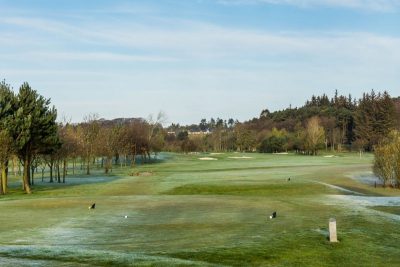 In Aberdeen there are good opportunities for a few rounds of golf.

Aberdeen is a very good starting point for those who like to combine city breaks with golf. With a rental car, you can easily reach many of Scotland’s finest golf courses in under an hour. In addition, you have more than enough lanes to choose from in the immediate vicinity of the city.

It’s pretty easy to park in Aberdeen. In the city center you will find different zones,and in some of them there is free parking 24 hours a day. In the most congested streets and neighbourhoods, an acceptable fee is charged at parking machines on the sidewalks. 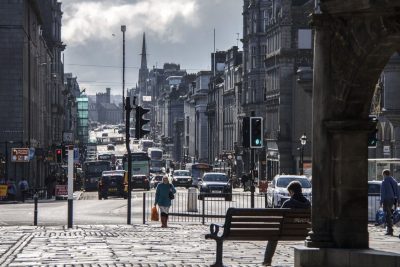 Remember to drive on the left side of the road in Aberdeen.

You can also load an app to your smartphone (RinGo) that you use for cash-free parking. The app must be associated with a valid bank or credit card. If you want to leave the rental car under a roof, you will find a good selection of parking garages in the city centre, relative to the size of the city (more than 10 parking garages).

Driving with your own rental car in Aberdeen is easy and straightforward, except that you have to keep in mind driving on the left side of the road. This turns most to quite quickly. There is not particularly much traffic in the streets, and most will experience the city as clear to navigate in. The speed limits are well marked with signs, and Scots follow roughly the same principles as other European countries. In cities and built-up areas, the speed limit is approximately either about 30 kilometers/h (20 mph) or 50 kilometers/h (30 mph), while on the highway you can drive at about 112 kilometers/h (70 mph).

Aberdeen International Airport is located no more than 10 kilometres northwest of the city centre (Port-adhair Eadar-nàiseanta Obar Dheathain in Scottish-Gallic). It has only one main terminal serving in excess of 3 million passengers a year, and is straightforward and straightforward for travellers.

In the terminal building, several of the major car hire companies are represented, including Avis, Alamo, Europcar and Sixt, as well as British companies such as Easirent.