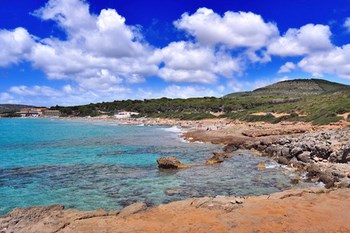 Alghero is situated on the northwest coast of the Italian island of Sardinia.The city has a population of just over 40,000 (2010). Alghero is basically a traditional fishing and seaport – but it also has a significant tourism. A period in the Middle Ages the city Catalan colony, and Catalan language and culture still has influence here.

One of the characteristic of Alghero, which was founded in 1102, is the traditional, maritime food culture.It serves seafood such as clams, crabs, lobsters and prawns virtually everywhere.

Otherwise, the city has many historical attractions to offer, including the beautiful Alghero Cathedral from the 1500s and the remains of the ancient fortifications around the city, including gate Torre del Portal. The most spectacular attraction is slightly off center: Grotta di Nettuno (Neptune’s Grotto) – an impressive cave. The entrance is just one meter above sea level, and you can get there via a stone staircase carved into the cliff above. There are regular guided tours here.

Alghero is also a seaside resort, and the beaches are inviting. Between the beach area and the old town, which is an attraction in itself, a popular hotel and nightlife area of Lido.

Alghero is also a good base for exploring other parts of Sardinia.

The nearest airport is Alghero Airport Fertilia, located 10 km north of the city.