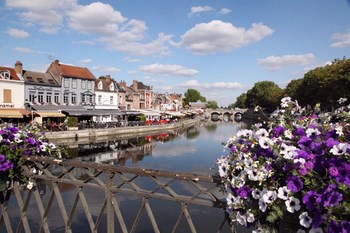 Amiens is the capital of both the Ministry and in the Somme region of Picardy in northern France.

Amiens has since medieval times been known for its textile production – but first and foremost, world famous for its stunning beautiful Cathedral of Notre-Dame, which is France’s largest Gothic church. It was begun in 1218, and through restored after extensive damage during the 2 World War. The cathedral is a UNESCO World Heritage Site.

Other attractions include Amiens the archaeological garden in the borough of Saint-Acheul – documenting settlements here from the early Stone Age and the two 1400-century church Saint Germain and Saint Remi. Otherwise Amiens also own Jules Verne Museum. The museum has exhibits that tell about the author’s life and work.

If you are looking for a different kind of attraction, “Amiens Circus” (or Cirque Jules Verne, which is the official name) is recommended. It was opened by Jules Verne in 1889 and it is located in one of Europe’s most distinctive buildings circus.