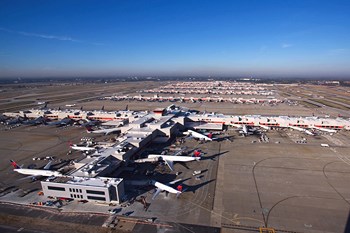 Hartsfield Jackson Atlanta International Airport (ATL) is located 11 miles south of Atlanta city center in the U.S. state of Georgia, and since 1998 has been described as the world’s busiest airport.

From Atlanta Airport there are direct flights to 150 U.S. and 75 international destinations in 50 countries. Airlines like KLM, Air France, British Airways, Lufthansa, Singapore Airlines and U.S. Airways flies here. The airport is also the hub for the U.S. airline Delta Air Lines.

If you need accommodation near the airport, there are several nearby. A number of hotels offer their guests free shuttle service to / from Atlanta Airport.

To get from the airport to downtown, you can take bus, subway or taxi. If you want to rent a car, however, has a number of reputable car hire offices at airport – including Avis, Alamo, Budget, Dollar, Enterprise, Hertz, National, Sixt and Thrifty.