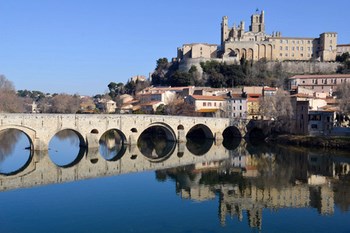 Béziers is a town located in southwest France – In the region of Languedoc-Roussillon – which belongs to the Ministry of Hérault.The city has about 71,000 inhabitants (2009), and by the river Orb – 14 km from the Mediterranean Sea.

Béziers is said to be one of the oldest cities in Europe, and the area has been settled since Neolithic times.

A major tourist attraction in Béziers is “Canal du Midi” – a canal that was built in the late 1600’s and is today a UNESCO World Heritage Site. The canal crosses the river Orb at the bridge “Pont Neuf” from 1858.

Other popular attractions in the city include the old bridge “Pont Vieux” from the 1100s, the beautiful “Plateau des Poètes” in the English style with its statues and fountains and art museum “Musée des Beaux-Arts” with exhibits of such Moulin and Van Gogh.

The old town of Beziers is located on a hill, which offers a beautiful view of the valley and river and canal traffic.