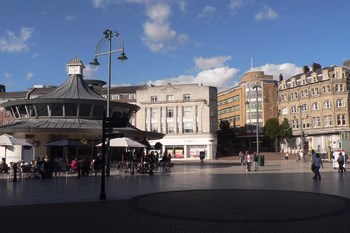 Bournemouth has 168,000 inhabitants (2010), and is situated on the south coast of England – more specifically the Poole Bay in the county of Dorset. Bournemouth is one of the most popular tourist destination in southern England.The strong tourism focus of the city in the last hundred years has made the city has expanded dramatically.

Bournemouth is renowned for having Britain’s mildest climate and some of the country’s finest beaches. In addition, the city is characterized by large green areas, where there are a total of over three million pine trees. Several parks are organized as beautiful gardens, of which the most popular is the Compton Acres – located just west of downtown. Desna is composed of seven smaller gardens are organized around each of their international theme.

The main shopping area of Bournemouth are concentrated around a few blocks in the city, on both banks of the River Bourne – near the beachfront. Great shopping is also in the large shopping center Castle Point, which is just north of the city.

The nearest airport is Bournemouth Airport, located 6.5 km northeast of the city.