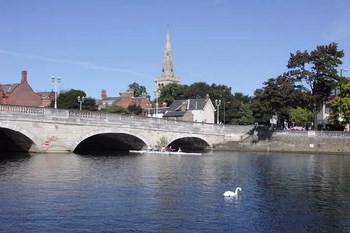 Cambridge is about 80 miles north of London, in the English county of Cambridgeshire. The population is around 111,000 (2010). Cambridge is one of England’s oldest cities – dating back to Roman times (Camboritum). Formal state has had since 1207.

Cambridge is known primarily as a traditional university, but is also the center of many of Britain’s major high-tech firms.

University of Cambridge is almost as old as the center (i.e., from the 1200s), and it is divided into a number of “colleges”. The most famous is Christ’s College, Trinity College and St. John’s College, all built in the late Gothic style. University includes the Cavendish Laboratory, King’s College Chapel, and the University Library. University complex is an important and dominant part of the urban landscape in Cambridge.

There is otherwise a number of architectural, historical and cultural sights in Cambridge – including Fitzwilliam Museum – an exhibition of paintings and antiques, Scott Polar Institute for Arctic and Antarctic research – and an impressive museum complex at Duxford Airport. It includes such departments American Air Museum (SMU) and the Imperial War Museum (War Museum).