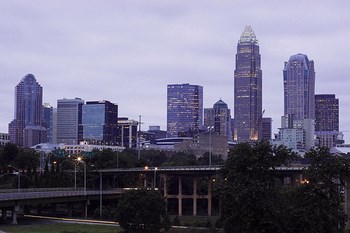 Charlotte is located east of the USA, and is the largest city in the state of North Carolina.The town is located near the Catawba River, and has 731,000 inhabitants (2010). If it is estimated metropolitan area population rises to 1.7 million.

Charlotte is an important commercial center for the region and a major financial center. Bank of America has its headquarters here. The city has several universities and colleges.

Charlotte has a humid subtropical climate with hot summers and relatively mild winters. The city gets most rain in January and March.

Center consists mostly of skyscrapers and tall buildings, and just south of downtown, the huge amusement park “Carowinds Theme Park”, which has many roller coasters and carousels.

Another tourist attraction in Charlotte’s art museum “Bechtler Museum of Modern Art,” which features exhibitions of contemporary art.The collection consists of 1400 paintings, and one can also see the works of Miró and Picasso here.

The country’s largest motorsports organization NASCAR is located in Charlotte and attraction “NASCAR Hall of Fame” is dedicated racing sport. It features interactive exhibits and display of historic racing cars.

Other tourist attractions in the city include Aviation Museum, the Science and Technology Museum “Discovery Place”, “Charlotte Nature Museum” – with interactive exhibits and butterfly pavilion, a botanical garden, “Levine Museum of the New South” – a history museum focusing on life in the state by the U.S. Civil War.