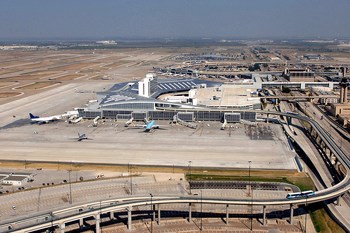 Dallas – Forth Worth International Airport (DFW) is located 24 miles northwest of Dallas center, and 29 km northeast of Forth Worth.The airport serves 57.8 million passengers (2011), and is the busiest in the state of Texas – and the 8 largest in the world in terms of passenger numbers.

Dallas Airport opened in 1953 and currently has five terminal buildings (A – E). There is a free shuttle (Skylink) between terminals.

At the airport there are hotels Grand Hyatt and Hyatt Regency.

To get to the downtown Dallas can take bus, train (there are shuttle bus from the terminal to the nearest station), subway or taxi.

If you want to rent a car in Dallas, has a number of major car rental companies – including Avis, Budget, Dollar, Hertz, National, Alamo and Thrifty – their offices at the airport, specifically in Terminal E – near the south entrance.