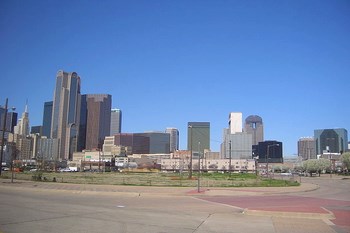 Dallas is north of the State of Texas by the Trinity River, and is the 9th most populous city in the United States. The city has 1.2 million inhabitants (2010), while the metropolitan area has a population of 6.3 million.

Dallas is a major cultural and economic center of the region and its economy is based on banking, commerce, computer science, medical research, transportation and logistics. In addition, Dallas known for its oil and cotton industries.

The city has a humid subtropical climate with hot summers and mild winters. Summer temperatures are around 35 degrees Celsius and in winter, the city daytime temperatures of ca. 21 degrees C. It is often humid in Dallas.

The cityscape is characterized by modern buildings and skyscrapers, and the tallest building is the Main Center – which towers 286 feet above the ground.

Some of Dallas’ most popular tourist attractions include Lake “White Rock Lake” with the surrounding park – which is a popular recreation area, John F. Kennedy Memorial Plaza – which marks the spot where he was murdered in 1963, “The Train Floor Museum” – museum which is also dedicated to John F. Kennedy sculpture park “Nasher”, “Meadows Museum of Art” – with extensive collection of Spanish art (including works by Eli Greco, Goya, Miró and Picasso) and “Dallas Museum of Art” – with a huge collection of artwork from ancient times until today. Here visitors including see the work of Monet, Gauguin and van Gogh.