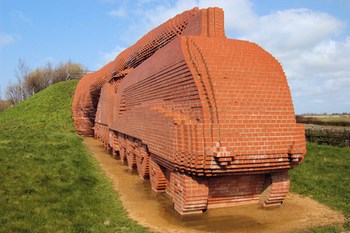 Darlington is a city of around 100,000 inhabitants (2010), situated in the county of Durham in England, by the River Skern (a tributary of the River Tees). The distance north to Newcastle is about. 60 km.

The town is most famous for the world’s first passenger train went from here to Stockton-on-Tees in 1825. At the train station Bank Top (Darlington Railway Centre and Museum) is still the engine that pulled the first passenger train – and it’s obviously a popular attraction. The historical train traditions characterize the city even today, and the railway workshops and other engineering industry still plays an important role in its industry.

Other attractions include Darlington Raby Castle from the 1300s – one of the most beautiful medieval castles in England, situated in a wonderful park a few miles outside Darlington town center. Otherwise, a visit to the Paddock Farm Nursery & Water Gardens to recommend. It is an impressive garden systems including tropical birds and fish.   It must also be noted that Darlington is a good base for excursions to the beautiful Tees Valley.