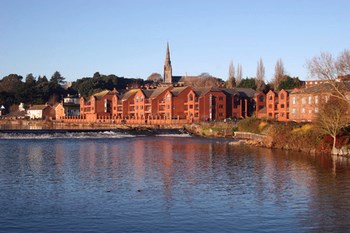 The historic city of Exeter is situated in the county of Devon – in southwest England.The city has about 119,000 inhabitants (2009), and is situated on the River Exe – as farther south flows into the English Channel.

Exeter is an administration – and commercial center for the region, and has its own university – which was founded in 1955. The city has several historic attractions and the beautiful cathedral “Exeter Cathedral” from the 1100s, attracting many tourists. The cathedral is built in the English Gothic style, with its distinctive tower s2 has been the city landmark for almost 900 years.

Another popular attraction in town is the museum “Royal Albert Memorial Museum & Art Gallery”. It features exhibits of over 1 million artefacts – both local history and international – in the areas of natural history, archaeology, geology and zoology. The collection also includes a number of art handicraft items.

Exeter also has a maritime museum, art galleries, theaters, cinemas, bars / clubs, swimming pools, golf courses and beautiful beaches in the area. There are also a number of parks and green spaces in the city – including Northernhay Gardens.