Compare prices and find cheap car hire in Geneva from well-known and local car hire companies. Insurances and unlimited mileage are included. Save up to 70% on car rental in Geneva through us. 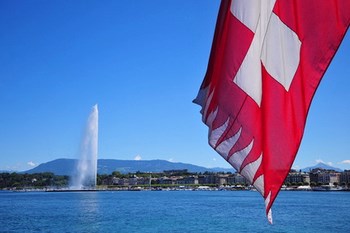 Geneva is located in the far southwest of Switzerlandand is the capital of the canton of Geneva. The town enjoys an exceptionally beautiful location on the River Rhônes outlet from Lake Geneva. In the city itself there are around 185,000 inhabitants (2010), but a significant suburban area extends from the city centre into France.

Geneva’s history dates back to antiquity, and it is the Romans who are considered the city’s founders, as the center Genava was built here around 120 f.Kr. Over the centuries, the city has been ruled by various masters – until the reformer Jean Calvin in 1536 settled in the city and made it a center of reformed Protestants. He founded both the university and other educational institutions in Geneva – including the famous Collège St. Antoine.

The town has an exceptionally beautiful location by the River Rhône.

Most of Geneva’s historical sights are to be found in the Old Town, Vieille Ville, located on a hill on the left bank of the Rhône. Here, most streets are narrow and crooked. Among the most important single-takers in Vieille Ville are St. Pierre Cathedral from around the year 1200 and the town hall, built in 1440 and 1578. Also close to the town hall are the Reformation Monument House and the childhood home of the philosopher Rousseau.

On the right bank are most of the offices of the international organizations. Of these, the UN Palace is the most flashy (built in the 1930s as the administrative center of the then League of Nations).

Along Lake Geneva, inviting promenades have been built, and free views of the city’s most famous landmark, the Jet d’Eau, have been built. There is a fountain that is placed out in the sea, and that sprays water 145 meters up into the air. The fountain, the sea, the promenades and the many beautiful parks make Geneva one of Europe’s most beautiful cities.

St. Pierre Cathedral from around 1200 in Vieille Ville.

Geneva is ideally located for those who use the city as a starting point for excursions with car hire. You reach many exciting places in a relatively short time, and the roads can be described as very good. Here are a few suggestions among the many tours recommended in the region. 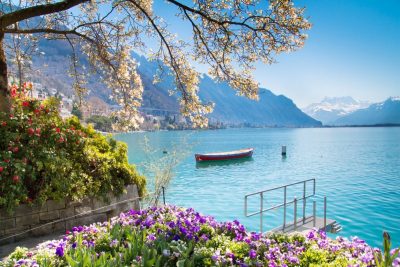 Montreux – City of Jazz and TV

Montreux is part of what is called the Swiss Riviera. Many people know the city because of the legendary jazz festival held there, and as the venue where the prize ceremony for Europe’s best TV shows is held (Entertainment Festival in Montreux). It’s beautiful in Montreux, and you should take the walk on the lakeside promenade, which runs along the lake, to the Château de Chillon if you stop by. 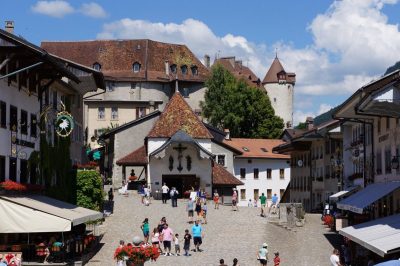 In Gruyères you will experience an authentic Swiss village – known for its excellent chocolates and cheeses.

Gruyères is a medieval town in the district called the same, and which you will find in the valley that goes north from Montreux. People come by here to experience an authentic Swiss village– not to mention to address the local delicacies. Gruyères is well known for its excellent cheeses and exquisite chocolates. Here you can join the small factories and learn about how the Swiss do it. The village is located up against a small hills, where you will find the town’s castle on top. This is one of the most beautiful and pleasant areas of the Swiss Alps. 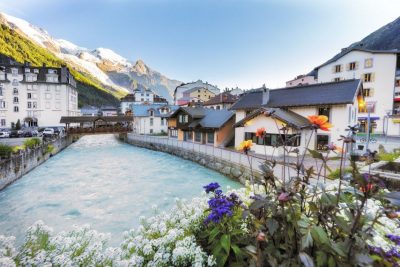 The Alpine town of Chamonix with its relaxing atmosphere.

Chamonix and Mont Blanc – Nice all year round

The Alpine town of Chamonix is located at the foot of Mont Blanc, the highest mountain in Europe west of the Caucasus (Mont Blanc is 4808 meters high). There are many Norwegian ski tourists here who travel in the winter, but the area and the town are also so nice in summer. Chamoix itself offers many good dining options, pleasant streets to stroll in, many exciting shops for those who want to shop, and a relaxing atmosphere. If you want to go into nature, you have all the possibilities. Unless you’re an experienced mountaineer, it’s the Aiguille du Midi you end up on if you want to see Mont Blanc in closer place. Here you get by gondola in about 20 minutes, and then get to see the Alps from an altitude of 3777 meters above sea level.

Interlaken is a popular destination for people who want to climb the Swiss mountains, and also offers nice boat trips on the two lakes the town is located between. On the lakes you can rent rowing boats, motorboats and sailboats, or join a tour of one of the steamships that go there. If you want to go to the mountains you can drive to different starting points and parking lots, take trains, or use your legs. Perhaps the best mountain hike you can choose from is the nearly 120-year-old railway that goes to Schynige Platte, the ridge of The Schwarzhorn Mountain. This train ride, and the train that takes you up to Jungfraujoch at 3460 metres, gives you a dazzling view both on the trip and when you arrive.

Interlaken with the mountain Jungfraujoch in the background. 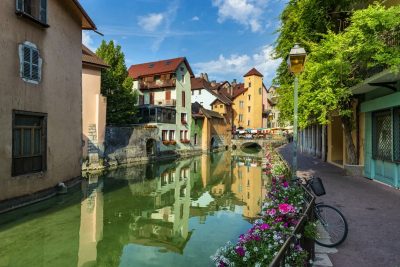 The charming French small town of Annecy with its canals.

Annecy in France is one of the most beautiful and charming small towns in Europe. It is located just south of Geneva, at the northern end of the lake which has the same name (Lac d’Annecy). The old town Vieille Ville is dominated by a nicely restored castle, medieval buildings, small canals and beautiful bridges. In this city it is great to stroll around and look at the buildings, sights and parks, not to mention taking meals at the many and good restaurants. 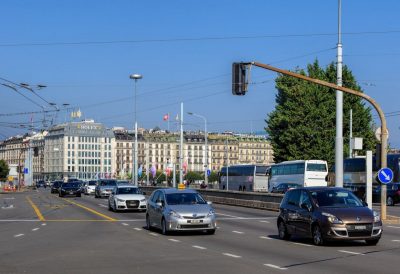 It is comfortable to drive in Geneva, but during rush hour there can be long queues in the city centre.

Generally speaking, it is very comfortable to drive in Switzerland. This is also true inside Geneva, if we disregard rush hour when people are going to and from work. Then there are often long queues in the city, and especially in the city center. Please note that there are many automatic speed meters here, and you will be fined as soon as you are only 5 kilometers above the speed limit.

Finding parking on the street in the city center is sometimes quite difficult. Most parking spaces get busy early in the morning, and remain busy until late in the evening. Instead, use the parking garages that you can find several of in the city centre, or leave the rental car in the hotel’s parking. Geneva’s centre is not so large and you can easily get around on foot. 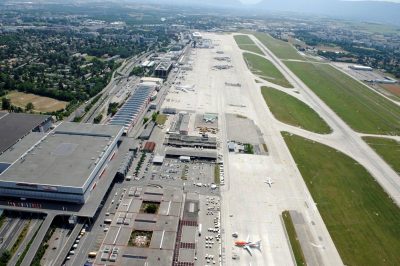 The airport in Geneva is called Geneva Airport, or Aéroport International de Genève in French. It is actually located in both France and switzerland, which means that passengers travelling to and from France do not have to go through customs if they leave the terminal building on the French side.

The number of car hire companies you can choose from will therefore also depend on whether you are going to France, or into Geneva in Switzerland. At the French exit at the airport you will find 6 international car rental companies, while on the Swiss side you will find 8 companies, including Hertz, Avis, Budget and Sixt.