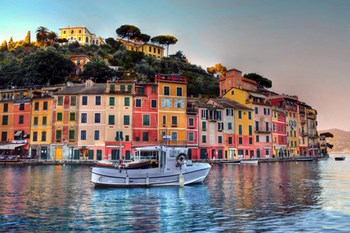 The port city of Genoa is located in northwest Italy by the Tyrrhenian Sea, specifically in the region of Liguria.Genoa has about 700,000 inhabitants (2010), and is the 6th largest city.

Genoa is an important commercial and cultural center of the region, was declared Capital of Culture in 2004 (along with the French city of Lille).

The explorer Christopher Columbus was born in Genoa in 1451, and in the center stands a monument to honor him.

A famous landmark in Genoa is the pinnacle, “La Lanterna” from 1128 – which is 117 meters high – and is one of the world’s oldest working lighthouse.

The renovated old port of Genoa attracts many tourists and there are a lot of nice restaurants and shops.

Otherwise Genoa an archaeological museum, a maritime museum and an aquarium (which is one of Europe’s largest).