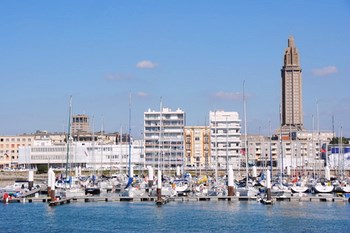 The port city of Le Havre is located northwest of France, around which the river Seine empties into the English Channel.The city is located in the region of Haute-Normandie, belongs to the Ministry of Seine-Maritime.

The city was founded in 1517, and have historically been an important seaport. Today, the ferry from Le Havre to Portsmouth England.

The city was badly damaged by bombs during the 2nd World War, but reconstruction began soon after the war was over. The center – a UNESCO World Heritage Site – reflects the historical traces of the old town.

Some of the most popular tourist attractions are among others the church Notre-Dame from the 1500s – one of the few surviving old buildings in Le Havre, the city history museum “Musée du Vieux Havre”, a natural history museum, concert hall “Le Vulcano” and art museum “Musée d’Art Modern André Malraux (MUMA). Art exhibition includes samples of such Boudin, Dufy and Degas.

The monastery Granville is also a well-visited attraction in Le Havre. The oldest part of the monastery derives from the 1000’s, and it also has a historical museum.

Summertime is the 2-km swim beach at Le Havre well attended. It is 500 meters from the town center and in the area are a number of nice restaurants and bars.