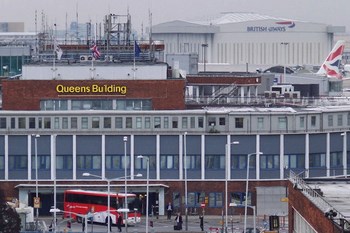 Heathrow Airport (LHR) is London’s main airport, and the 4th busiest in the world (2010). The airport is located in the borough of Hillingdon – 24 km west of London city center.

The airport serves 65.8 million passengers per year. 2010 and ca. 100 airlines have direct flights from here to almost 170 destinations in Norway and abroad. Heathrow Airport is the hub for British Airways, BMI and Virgin Atlantic.

The airport was founded in the 1930s, and currently has five terminals. Its great shopping at Heathrow Airport with shops (including Duty-free shops) and all terminals have good selection of restaurants, cafés and bars. Other facilities include ATMs, money exchange, pharmacy (for terminal 1), Spa / Massage (Terminal 5), Vip Lounges, prayer, chapel and Art Gallery (Terminal 5). The airport is well adapted for the disabled.

To get into central London can take express trains, underground (Piccadilly Line), bus, taxi or rental car. At the airport’s offices to eight car rental companies – including the renowned players such as Avis, Hertz, Europcar and Budget.