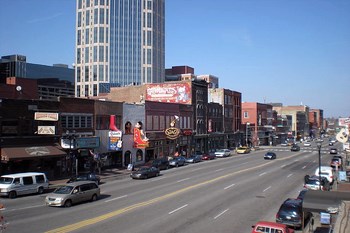 Nashville (Nashville-Davidson) is the capital of the state of Tennessee. The city lies on the River Cumberland River in central state – and has just under 600,000 inhabitants (2010). In the greater metropolitan area, where Nashville is the center, it should, however, three times as many people.

Nashville is important both as a transportation hub and industrial – and is also an educational center – with all three universities.

In 1784 Nashville was granted city status, and since 1843 the city has been the state capital.

Nashville is considered as country & western music “Mecca” and the most popular attractions in the city, in one way or another related to this musical tradition. “Grand Ole Opry” is the most famous C & W scene, and has existed as a radio program since 1925.   The scene was a few years ago moved outside the city. Nashville also has an extensive phonograph industry. Otherwise, the following points of interest associated with this music genre: “Country Music Hall of Fame and Museum”, “Belcourt Theatre” and “Ryman Auditorium”. And each year The CMA Music Festival, which attracts C & W fans from around the world.

There are also a number of music clubs and so-called “honky-tonk” bars in downtown Nashville.

Nashville has also another culture to offer – including “Tennessee Performing Arts Center” as an important driver for the Performing Arts. Also Nashville Opera and Schermhorn Symphony Center – Nashville Symphony Orchestra which has its base, must be mentioned.

On the outskirts of town we find “The Hermitage”, former President Andrew Jackson’s home and grave site. Ham was the U.S. president during the period 1829 -1837.

The nearest airport is Nashville International Airport, which is 16 miles southeast of downtown.