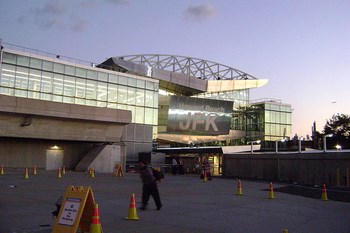 John F. Kennedy International Airport (JFK) is the largest and most important airport in the USA. It is located in the Jamaica neighborhood of New York City borough of Queens, and serves about. 47 million passengers a year.There are also two other major airports in the New York Neighborhood (La Guardia and Newark).

The airport was begun in 1942 and opened for civil aviation in 1948. Until the assassination of President John F. Kennedy in 1963 was the official name of New York International Airport. Today they call the airport usually short, JFK Airport.

John F. Kennedy Airport have nine terminals, but in recent years, some of them occasionally been closed for renovation. This work is now almost complete.

A number of international airlines operate a large number of regular flights to destinations worldwide.

Otherwise, you can use the yellow taxis. Limousines with a driver is also available, if you want to put money into it.

If you want to rent a car in New York, there are more opportunities at John F. Kennedy Airport. International rental agencies like Avis, Budget, Dollar, Enterprise, Hertz and National are represented there.

There is only one hotel at the airport – Ramada Plaza Hotel. There are, however, several hotels in the airport community, including Best Western JFK Airport, Comfort Inn JFK, JFK Holiday Inn, Hilton Garden Inn and JFK Courtyard by Marriott – all with free shuttle service to and from the airport.

Public facilities in terms of shops, restaurants, cafés and bars are very good at all terminals. If you are experiencing problems with her feet in this large airport, you can contact one of the many representatives of the Traveler’s Aid. They are easily recognizable in their red jackets.