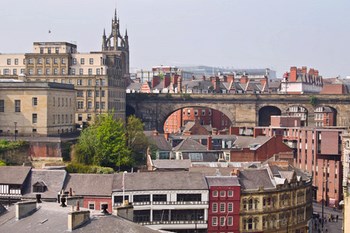 Newcastle (also known as Newcastle-upon-Tyne) is located in region North East England the River Tyne – which has its outlet in the North Sea 15 km further east. The city is located in the county of Tyne and Wear, and has 272,000 inhabitants (2009).

Newcastle is an important administrative, commercial and cultural center for the region. The city is perhaps best known for its beer production (“Newcastle Brown”) as well as the football club Newcastle United   FC – who play their home matches at the football stadium “St. James’ Park.”The stadium is located centrally in the city on a hill, and can accommodate over 50,000 spectators.

Newcastle is also famous for its many bridges over the River Tyne.

Newcastle has a number of art galleries and museums – including Laing Art Gallery – where you can see works by Van Gogh, Rembrandt and Renoir. One should also take a trip to the “Discovery Museum” – which has exhibits of artefacts in science, technology and history.