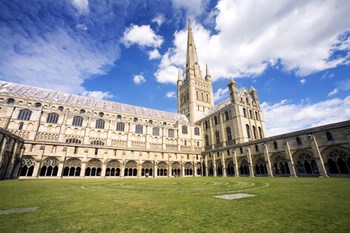 Norwich is situated on the River Wensum in Southeast England – About 30 km from the North Sea coast. The city has 135,000 inhabitants (2010), and is part of the county of Norfolk.

Norwich is a road and railway junction and an important commercial and administrative center of the region. The city has many beautiful old buildings – which shows that Norwich was from the 1100s to the 1800s one of Britain’s biggest and richest province cities.

The city has more than 30 preserved medieval churches – including the cathedral from 1145 in Romanesque-Norman style. Another tourist attraction in town is the Norman castle “Norwich Castle” from 1067. Today the castle houses a museum and an art gallery.

Other popular attractions include Norwich old town with cobbled streets and museums, “Cow Tower” – and historic military tower from the 1300s, the building “Dragon Hall” from 1430 and the market at City Hall.

Norwich is known to be a very popular shopping town with shops and malls, and the city has also a vibrant nightlife with restaurants, pubs and night clubs.