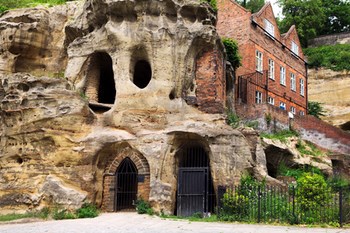 Nottingham lies on the River Trent in central England, and has approximately 307,000 inhabitants (2010).The city belongs to the county of Nottinghamshire.

Nottingham is located at Sherwood Forest, and is perhaps best known for its legend of Robin Hood. At the old castle “Nottingham Castle” is a statue of the character, and the city hosts an annual Robin Hood Festival during the summer.

Nottingham is a popular tourist destination and receives approximately 300,000 visitors annually. Some of the most popular attractions in the city include the historic center from the 1300s, with cobblestone streets and the Old Market Square “Old Market Square” castle “Nottingham Castle” – which today houses a City Museum and Art Gallery, St. Mary’s Church from the 1400s and the old sandstone caves in the “City of Caves “.

Nottingham can also offer tourists great shopping and a diverse nightlife. The pub “Ye Olde Trip to Jerusalem” is said to be one of England’s oldest pubs – which was first opened in 1189.

Passengers traveling to Nottingham with kids, a visit to the amusement park “Wheel Gate Adventure Park” is recommended.