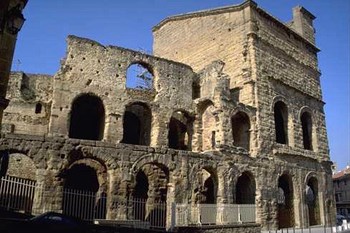 Orange is a small town in southern France – which is located in the department of Vaucluse – a little east of the Rhone river.The city has about 30,000 inhabitants – and is in a traditionally agricultural area.

Orange was founded in already in the year 35 BCKr. At one time the town center in a separate, small principality (Oranien-Nassau).

Among the undisputed attractions and tourist magnets, the two impressive Roman ruins. One is one of the best preserved amphitheatres in France – “Théâtre antique d’Orange” – which once had space for between 6,000 and 10,000 spectators. It was built during the first century ADKr. Since 1869 an annual opera festival – Chorégies d’Orange – occurred here.

The second is the triumphal arch “Arc de triomphe d’Orange” – possibly even a little older than the theater.It is 19.5 m wide and 19.2 m high and decorated with reliefs.

Together with the surrounding landscape has triumphal arch and theatre since 1981 has been listed as a UNESCO World Heritage Site.