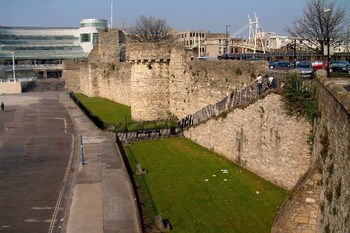 Southampton is located in the southeastern part of England – About halfway between Portsmouth and Bournemouth. People have lived in Southampton since the Stone Age, and the city has approx. 225   000 inhabitants (2010).Southampton is South England’s main seaport.

During the Second World War, Southampton subjected to a heavy bombardment, many of the historic buildings were completely destroyed. Something is still preserved – including parts of the old city wall and gate Bargate. This is a popular tourist attraction. The main sights are otherwise: “Southampton City Art Gallery” –   that can show samples from 600 years of European art history and Southampton Maritime Museum, with its large Titanic exhibit. Accident ship Titanic had inaugurated his home port of Southampton.

Like so many other English cities, associated also with Southampton football. Southampton FC (“The Saints”) has its home here.

The nearest airport is Southampton Airport, which is located 6.5 miles northeast of downtown.