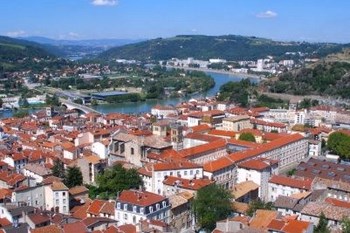 Vienne (30   400 inhabitants in 2002) is located in the Rhone-Alpes region, in the department of Isère, 30 km south of Lyon. The city is known for metallurgical and chemical industries – as well as textiles and footwear.

The city is very old and there are many Roman building memories that are kept primarily Augustus and Livia Temple and the Roman theatre.

Vienne has several beautiful churches: St.-Pierre Church, partly from the 500’s, is now an archaeological museum.Otherwise, a Romanesque monastery church from the 1100s and a beautiful Gothic cathedral from 1100-1400’s mentioned.   Beyond this, it is remarkable that many homes from 1400 – and 1500’s are preserved.

An event that has set the modern Vienne on the map, is an international jazz festival that takes place every year in June / July in the Roman theatre.