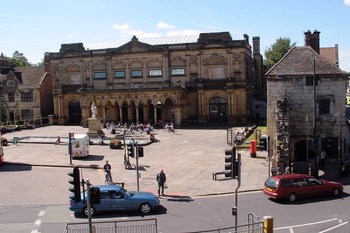 York has approximately 185,000 inhabitants (2010), located in Northern England.The town has existed since Roman times (Eboracum) – and was also the center of the Viking kingdom of Jorvik. The last Viking king of Jorvik / York Eirik Bloodaxe, who were displaced by the English in 954

There are a number of interesting attractions in York. Parts of the old city have been preserved, and most notably the narrow street “The Shambles”, with its beautiful half-timbered houses. Otherwise, one of England’s cathedrals here – York Minster. It was built in the Gothic style in 1220. Parts of the old medieval city walls are preserved, and some of the gates. The most impressive of these is enough “Mickelgate Bar”.

If you are in York, you should also check out the National Railway Museum. Where can such see the world’s fastest steam locomotive, “The Mallard”.   It set a speed record in 1938 with 202 km / h, and was – with its aerodynamic design – long before his time.