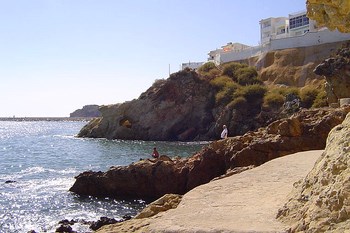 Albufeira is a municipality located far south of Portugal, the Algarve coast – about 30 miles west / northwest of the city of Faro.The whole municipality has approx. 40 000 inhabitants (2010).

Albufeira Municipality consists of five parishes (freguesias): Albufeira, Ferreira, Guia, Olhos de Agua and Paderne – where the administrative center (with ca.13.000 inhabitants) named the same as the municipality, namely Albufeira. This was originally a typical sørportugisisk fishing village, which was developed as a tourist destination during the 1970s.

During the summer season comes around 300,000 visitors to Albufeira, a sign that the city is one of the most popular on the Algarve coast.Here you live well and eat well. Among the local gastronomic specialties are cataplana (steamed clams), caldeirada (a kind of fish stew) and grilled sardines.

The town is characterized by narrow streets and whitewashed houses, but also some modern hotel architecture.

During the tourist season there is a lively nightlife in the city, which is full of bars, restaurants and nightclubs. Here’s something for every taste. The most popular area for young people, often called “The Strip”. There are several very popular discotheques and night clubs. For those who prefer a little quieter environment, is perhaps one of the restaurants or bars in the oldest part of the city preferred.

Albufeira’s main historical attractions are Paderne, 8 km north of Albufeira town. Here are fort Castelo de Almoáda, in addition to a well-preserved Roman stone bridge, which is considered among the “Seven Wonders of Portugal.”

For most of the tourists who come to Albufeira, it’s probably the inviting sandy beaches that beckon most. There are a total of around 20 of them in the community. Just outside the town is also a popular animal and leisure park (Algarve Zoo).

The nearest airport is Faro Airport, located about 40 km southeast of Albufeira.