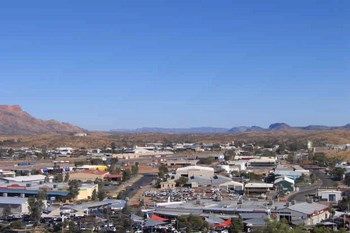 Alice Springs is situated roughly in Australia – in one of the most sparsely populated regions that belong to the Northern Territory (Northern Territory).The city has about 27,500 inhabitants (2008), and was founded in 1871 as a telegraph station. Alice Springs since the 2nd World War II has been associated with the port of Darwin on the north coast, through the 1600-mile “Stuart Hightway”.

Alice Springs is a desert plateau and is surrounded by desert areas – including the Simpson Desert. Tourism in Alice Springs has in recent years become an important source of revenue for the city and is a popular starting point for trips to the famous rock formations of Uluru (Ayers Rock) and Mount Olga. Uluru is 46,5 mil southwest of Alice Springs – approx. 6.5 hour drive by car.

Alice Springs is also known for its annual festivals – especially the popular camel race “Camel Cup” to be held in July. Other attractions in the city include telegraph station museum, a botanical garden, reptile collection in “Alice Springs Reptile Centre” and the cultural history museum “Mbantu” – where you can learn more about Aboriginal art and culture.

Airport Alice Springs Airport is located 14 km south of the city center and has direct flights to a number of major Australian cities. There are also fly from here to the tourist attraction of Uluru (Ayers Rock).