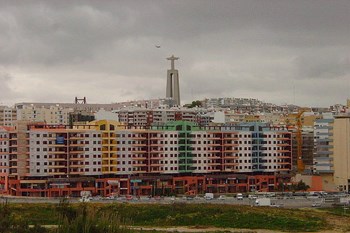 Almada is located at the mouth of the river Tagus, opposite the Portuguese capital Lisbon. The city has about 160,000 inhabitants (2010), and is often presented as one of Lisbon suburbs.Almada is related to the capital via the famous “25 April Bridge “over the Tagus.

The name Almada Arab origin (al-Madan), and stems from the period Moors ruled the Iberian peninsula. Its history stretches back to the Middle Ages hence, but only in 1973 was awarded the official status.

Almaden’s focal point is the huge statue of Christ Cristo Rei, which is at the south end of the bridge, and as can be seen from most parts of Lisbon. It is 28 meters high and stands on a 82 meter high shelf. The statue was unveiled in 1959.   Seven years later – in 1966 – opened “25 april bridge “over to Lisbon. The original name was the Ponte Salazar, in that it was named after Portugal’s former dictator. It is one of the world’s longest suspension bridges, with a total length of 2277 meters – and a suspension bridge span of over 1,000 meters.

The statue of Christ and the bridge Almaden are two of the most famous sights.