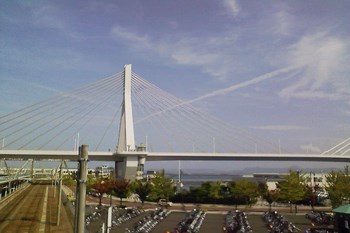 Aomori is the capital city of the Japanese prefecture of Aomori, located at Mutsu Bay on the north part of the island of Honshu. The city has about 300,000 inhabitants (2010). Aomori was incorporated as a city in 1898.

There has been a settlement here since prehistoric times, and archaeologists have made many exciting discoveries in this area. Sannai-Maruyama Ruins slightly southwest of the city, dating to around 4000 BC Kr. – And is one of the city’s major attractions.

Otherwise Asamushi, located 14 km northeast of the town, a popular tourist destination. Here the heat sources (called “onsen” in Japanese), and also good bathing. The area is also Asamushi Aquarium, which has an impressive size. It can present a wealth of different fish and marine organisms – in addition to Sea otters, sea lions, seals, dolphins and penguins. There is also an amusement park in the same area.

In Aomori there is otherwise an array of museums – including an art museum, a folk museum and a museum of regional folk arts. Also Buddhist Temple Seiryu-ji should be mentioned among the attractions. Outside the temple stands at 21 meters high Buddha statue.

Each year in early August, the big Aomori Nebuta Festival, which attracts crowds from all over Japan.

The nearest airport is Aomori Airport, located 14 km south of the city.