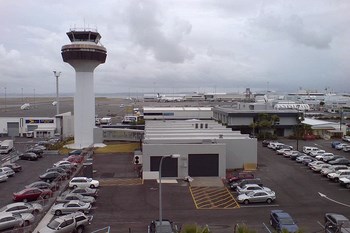 Auckland International Airport (AKL) is New Zealand’s largest and busiest airport, and is located on the North Island – 22 km south of Auckland center.The airport serves about 13 million passengers a year (2011).

Auckland Airport opened in 1965 and has two terminal buildings. There are shuttle buses between terminals.

The airport is the main hub for the airline Air New Zealand.In addition, approx. 25 other airlines direct flights from here to a variety of destinations at home and abroad – including to Sydney, Hong Kong, Singapore, Bangkok and Los Angeles.

There are a number of facilities to travelers at the airport, including wide range of shops and eating places. In addition, ATMs, business center, information counter, medical center, currency exchange office, prayer room and internet access. There are two hotels at Auckland Airport.

To get to the Auckland city center from the airport, you can take a bus or taxi. City buses depart every 15 minutes throughout the day.

If you want to rent a car in Auckland, has a number of car rental companies in their branches at the airport – including Avis, Hertz, Europcar, Thrifty and Budget.