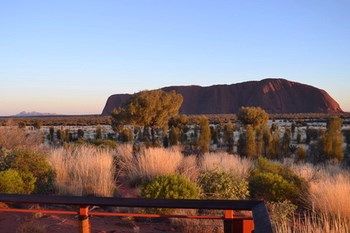 Ayers Rock / Uluru is a large sandstone rock formation of which is located in the center of Australia, the Northern Territory, 450 km southwest of the town of Alice Springs.It is the world’s second largest monolith after Mount Augustu also located in Australia and an important known brand for Australia.

The mountain is sacred to indigenous Australians, aboriginals, and it is they who have given the mountain its original name Uluru. They arrange tours where visitors get to hear about the local flora and fauna and ancient legends. Around 400   000 visit the place every year, and it is especially popular to climb the mountain. In 2002 it was decided that it would officially be called Ayers Rock / Uluru.

Ayers Rock / Uluru. Located in the National Park Uluru-Kata Tjuta. Since 1987 it has been on the UNESCO World Heritage List. It is also known as the center of the world. Rock formation exceeds 348 meters above the ground, but most of it is below the surface.

Archaeological evidence shows that there were people in the area more than 10,000 years ago. The first European who discovered Uluru was the explorer William Gosse in 1883. It was he who named it Ayers Rock in honor of Governor Sir Henry Ayers.

Monolith surface changes color depending on how the sun rises in the sky and what season it is. A particularly famous image of Uluru is when it turns red at sunset.

The nearest airport is Ayers Rock Airport, also known as Connellan Airport, which is 20 minutes drive away.