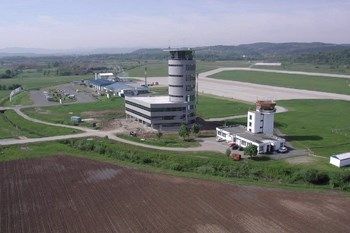 It is a very small airport that currently (February 2013) only served by BH Airlines flying four times to Zurich a week and to Sarajevo.The airport has tried to attract other airlines by subsidizing them. It is owned by the state company “Aerodromi Republike Srpske”.

15. November 2010 was a symbolic flight made to Brussels to celebrate that Bosnians no longer need visas to the Schengen countries. In 2011, 8367 people visited the airport, passenger numbers had gone down to 6424 in 2012.

The airport has a cafe, a kiosk and a VIP lounge.