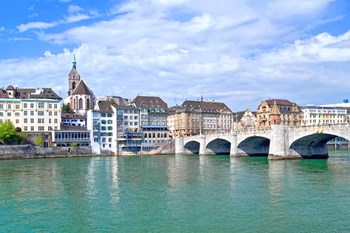 Basel is located in northwest Switzerland, near the border with Germany and France, and is the capital of Basel-Stadt.The river Rhine flows through the city. Home to just under 170,000 people in Basel (2011). The city is part of a city region which includes the suburbs in France and Germany – as well as one of Europe’s most important traffic hubs. Basel is Switzerland inland nation’s only port (terminal station for ship traffic on the Rhine).

Basel is one of the most important financial and industrial cities in Switzerland – in addition to that it is an old university town. The country’s oldest university was founded here in 1460. Basel is an ancient city, probably built by the Romans in the 400s ADKr. In the Middle Ages the city was a religious center, and after the Reformation in the 1500s increased the city’s religious significance.

Basel Rhine divides into two main sections. The south bank is the largest district – Gross Basel south of the river, while Klein Basel is located on the north shore. It is in Klein Basel you will find the port area, where there will also fairs regularly. Gross Basel include the city’s central business district.

Most of the sights are in Gross Basel, including the impressive femskipede cathedral from 1000’s, the Old Town Hall from the early 1500s, and the beautiful gate “Splendor” from 1370.

Basel a number of interesting museums to offer. These include Basel Historical Museum, several art museums, the pharmaceutical historical museum at the university – as well as the special “Puppenhausmuseum”, which is a museum of dolls.

The international airport Basel-Mulhouse-Freiburg Airport is located in Saint-Louis, on the French side of the border, 13 km northwest of the center of Basel.