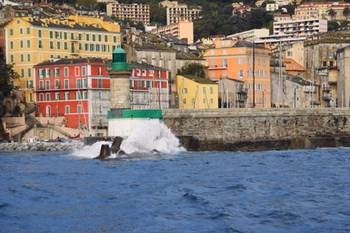 The port city of Bastia is located northeast of the island of Corsica in the Mediterranean Sea and is main town in the French Ministry of Haute-Course. Bastia has about 45,000 inhabitants (2010), and is known to be one of the prettiest towns in Corsica. The city is also known for its excellent wines.

Bastia has great tourist traffic in summer, the port for ferries to France and Italy.

The old port of Bastia “Port de Plaisance” is a favourite place for tourists – where many cozy cafes and restaurants. Also the old town is a major attraction – with its picturesque streets and alleyways. This is also the church of Saint-Jean-Baptiste from the 1600s – which is the largest church in Corsica.

Other attractions include Bastia St. Mary’s Cathedral from 1495, the castle “Le Citadelle” from the 1300s (with its clock tower from the 1500s), the beautiful main square “St. Nicolas” and Corsica’s Ethnographic Museum (housed in the Governor’s Palace). The museum has exhibits of geology, flora, history, art and folk traditions.

For those who want sunshine and swimming in Bastia, one finds the best sandy beaches just south of downtown.