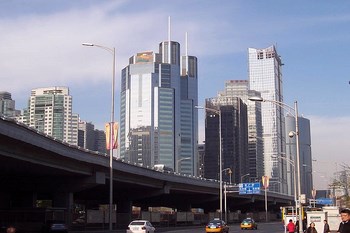 Beijing has been the capital of the People’s Republic of China since Mao’s communist revolution in 1949.Several earlier periods in China’s history has had capital function. It is located in the northern part of the North China plains, about 160 km from Bohai Bay. It is with its almost 20 million inhabitants (2010) one of the world’s most populous cities.

Beijing has probably existed since around 1000 years BCKr. and has been a central city for most of ancient China’s many dynasties, and the city has naturally enough, a number of attractions to offer. The Chinese government has even singled out 98 cultural and historic attractions as particularly worthy. Six of these are also on the UNESCO World Heritage list: the Forbidden City, the Great Wall, Temple of Heaven, Summer Palace, Ming Tombs and the place where the remains of “Peking Man” was found.

The city has a rich cultural otherwise with such a number of concert halls and theaters. If you are in Beijing, you should definitely check out a performance of Peking Opera (which is also the name of the famous and distinctive form of Chinese opera). In addition, the Palace Museum is well worth a visit. It is regarded as Beijing’s main museum – and is very comprehensive. It includes the following buildings and the imperial collections of the Forbidden City – a complex that was within the so-called Imperial City. The name comes from this area, which is still surrounded by a wall, was banned for ordinary citizens. The former imperial palace from the 1400s is one of the major attractions in the Forbidden City. There are also several other palaces in this complex.

“Tiananmen Square” is one of Beijing’s most famous places. Home to several monumental buildings of recent times. The most dominant is the Great Hall and the Chinese National Museum.

Otherwise, there are few who leave Beijing without having walked on the Great Wall of China – China’s most famous buildings. Mao should have said once that if you have not walked on the Wall is not a true man. With a total length of 6.400 km is the Great Wall of China the world’s largest and longest structure, and it was begun in 1368. With Beijing as a starting point, we must expect an hour’s drive to reach the starting point.

The nearest airport is the Beijing International Airport (PEK) – which in Chinese is called Beijing Shoudu Guoji Jichang. It is located 20 km northeast of Beijing city center.