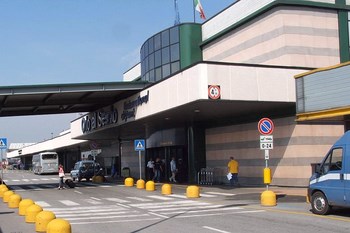 Bergamo Airport (BGY) – which bears the official name of “Internationale Aeroporto Orio al Serio” – is situated 5 km south of Bergamo and around 45 km northeast of Milan .It serves as the main airport of Bergamo area, and as one of three international airports serving Milan. (The other two are Milan-Malpensa and Milan-Linate). It is particularly low cost carriers that use Bergamo Airport. A total of 4.5 million passengers pass through this airport each year.

To and from Bergamo Airport are offered affordable travel to a number of destinations across Europe. The biggest player is the Irish airline Ryanair.

The most efficient way to get from Bergamo Airport to Bergamo city center is to take shuttel bus. The trip takes about 15 minutes. Taxi is of course also an option. The station for Milan, trains on the railway station in the center of Bergamo.

If you want to rent a car in Bergamo, several international car rental agencies, their affiliates in the arrival hall of the airport. Here we find such the renowned players such as Auto Europe, Avis, Europcar, Hertz, Sixt and Maggíori.

There are no hotels at the airport, but the surroundings are both “Star Hotel Cristallo Palace” and “Hotel Piemontese”.

Bergamo Airport has a number of facilities for travelers – including several restaurants, bars and shops.Some stores specialize in Italian fashion and various luxury items, while others have focused on typical products of Lombardy region. In addition, medical center, pharmacy, VIP Lounge and ATM at the airport.