Compare prices and find cheap car hire in Bergamo from well-known and local car hire companies. Insurances and unlimited mileage are included. Save up to 70% on car rental in Bergamo through us. 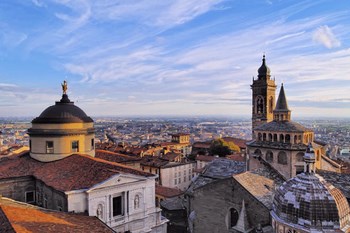 Bergamo is the capital of the province of Bergamo, located in the Italian countryside of Lombardy – 40 km northeast of Milan. It is a short distance from the Alps,and the beautiful valleys of Valle Brembana and Valle Seriana are located in bergamo’s vicinity. About 115,000 inhabitants live in Bergamo (2010), which has some industry (especially in textiles, food and electronics). The city also has its own university, which opened in 1968.

Bergamo, like so many other Italian cities, was founded in antiquity by the Romans – and it then bore the name Bergomum. In recent history, the city was subject to different rule. Among other things, it is not the first time that The New York it belonged to Venice from 1428-1797 – and later Austria– until it became Italian in 1859. 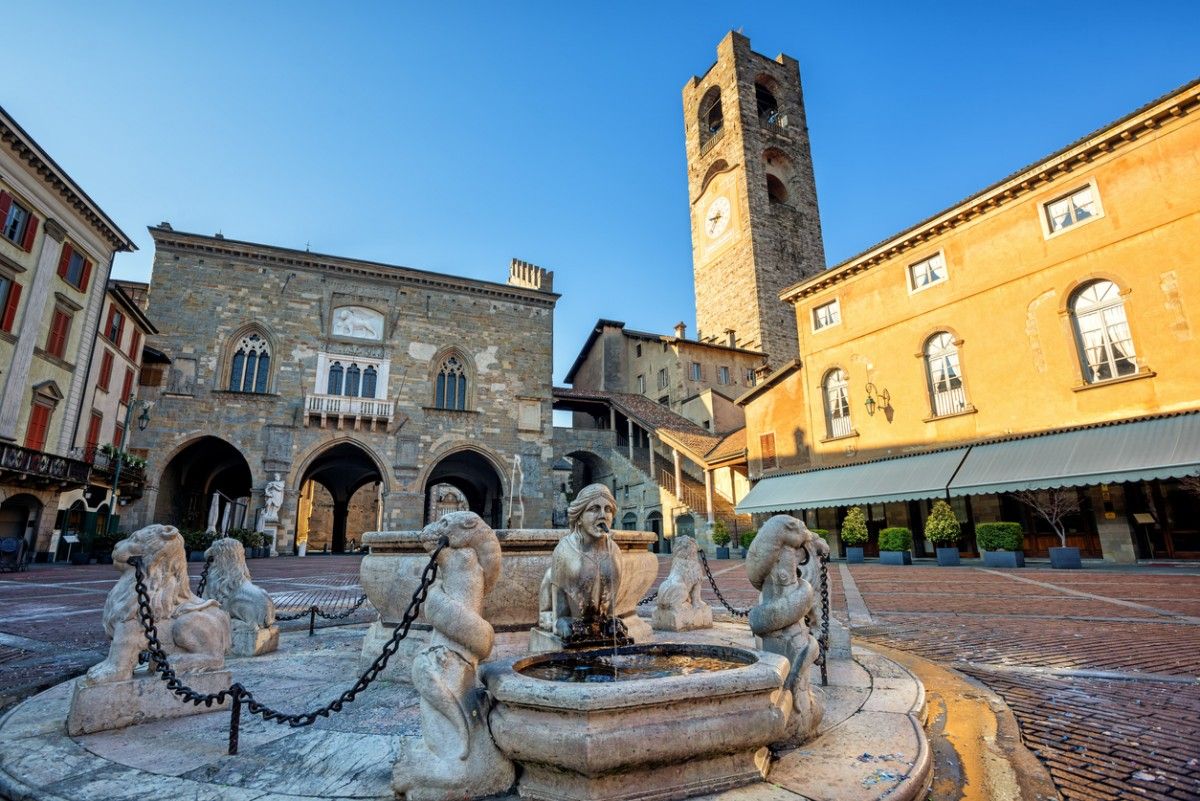 The old town, Città alta, is itself an important tourist attraction – and here are also several of the city’s architectural gems – among others. Piazza Vecchia Square. By the square we find the 1190s Palazzo della Ragione – which is Italy’s oldest town hall – and the Palazzo della Biblioteca from the early 17th century. Other important buildings include Palazzo Broletto and the church of Santa Maria Maggiore, both from the High Middle Ages.

The new district, Città bassa, is characterized by a hectic business life – and there are also several shopping centres. The streets are otherwise dominated by a diverse range of business and financial institutions.

The city of Bergamo is interesting enough, but most people who fly here are either going to Milan, or exploring the region. This is a very good starting point for the past. The distance from Bergamo and to beautiful valleys with lovely villages, is only a few kilometers. The most beautiful lakes in Italy are also close by. Here are some suggestions for driving routes. 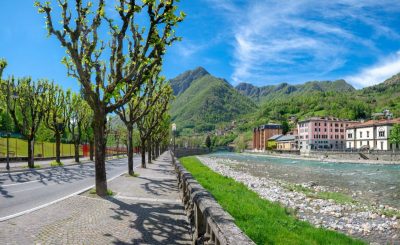 San Pellegrino Terme is located in a beautiful valley.

San Pellegrino Terme – The spring water in you can bathe in

This is the small town where the famous spring water you are often served in restaurants comes from. San Pellegrino Terme is just a short drive from Bergamo, in a beautiful valley, sandwiched between the mountains. The spring water you can bathe in, while at the same time you’re wondering about the fact that it takes almost 30 years to get from the Alps down to the city where it’s drained on bottles. Since the water is supposedly healthful, you will find several good spas in San Pellegrino, also at some of the hotels in the city. The oldest thermal bath is from 1840. In San Pellegrino Terme you stroll in quiet streets, surrounded by magnificent art nouveau-style buildings. 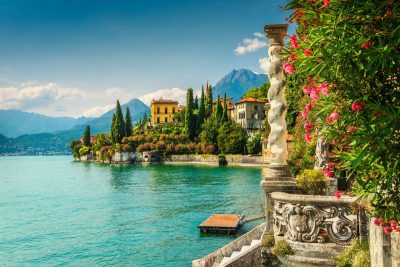 Around Lake Como there are many lovely villages.

Como is the third largest lake in Italy, and is often considered the most beautiful. It looks like the letter Y turned on its head. Along the entire lake you will find lovely little villages, in addition to the larger towns of Como and Lecco which are at each end of the arms of the lake. On Lake Como you take a boat trip,you look at the architecture,sit in nice cafes, bars and restaurants, swim, enjoy the children whether they are with, or just enjoy the quiet life of one of Italy’s most beautiful areas. The small town of Bellagio is considered by many to be the pearl of Lake Como. It can be found at the tip where the two arms of the sea have branched down to Como and Lecco respectively. 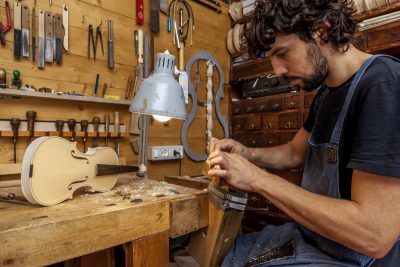 Cremona – The Music City of the Po Valley

The town of Cremona in the Po Valley is primarily known for its music history,and especially for its centuries-old traditions of making musical instruments. It is from here among other things the exclusive violins of the Stradivari family come from, better known as Stradivarius. In total, there are over 150 different instrument makers in Cremona. Of course there are concerts here almost continuously, there are regular festivals, and folk life is described as pleasant and welcoming. The city is also among the most beautiful in the region. 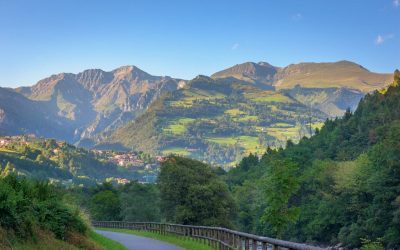 For nature lovers, the Seriana Valley is the place to go both summer and winter.

The Seriana Valley is a mecca for anyone interested in nature, regardless of the season. In the mountains along the valley you will find 5 ski resorts that have good conditions in winter and which are great hiking areas when the snow is not on the ground. Scattered along the valley there are beautiful villages with medieval buildings,and between these the vineyards and farms are close. Wherever you stop, you’ll find pleasant dining options with regional delicacies, fine wine, and friendly people who love to visit. If you follow the valley all the way in, you will eventually have to turn around, because here the road ends in the mountains. A nice route is to first experience some of the villages of Val Seriana, and then head east towards lake Lake Lake d’Iseo.

Lago di Garda is Italy’s largest lake, and well known to many Norwegian tourists. The mild climate of the valley is unique at this latitude, and even olives grow here. That in turn makes the lake a popular destination all year round. As with Lake Como, there are beautiful villages and towns along most of the sea’s banks. There are seas of those to choose from, and the vast majority are very nice and pleasant to stay in. Among the main visited places you will find the small fortress of Castello Scaglieri in Sirmione, the towns of Desenzano del Garda, Riva del Garda (at the very northern end), Malcesine and Bardolino. 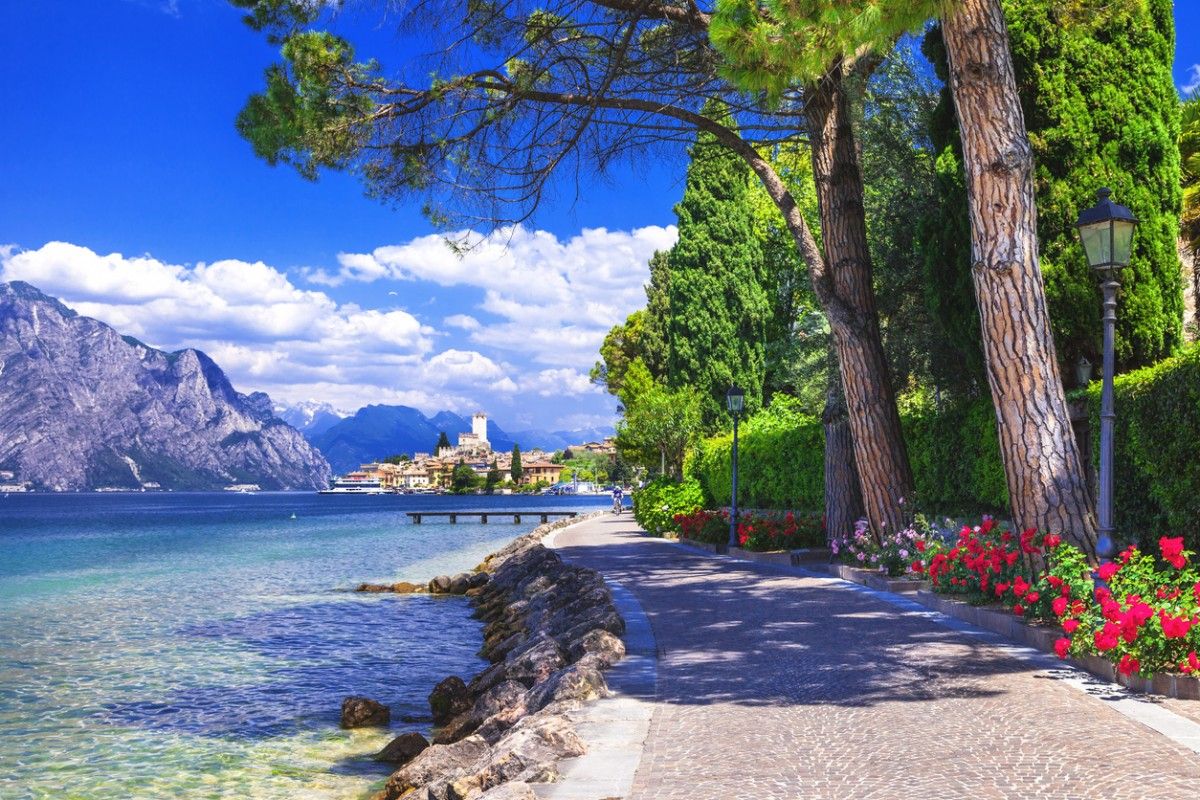 Like many other cities in Italy, Bergamo has zones that are car-free. These zones are called ZTL, and are usually well marked with signs. If your hotel is within a ZTL zone,this is usually solved by contacting hotels before you arrive with the rental car. The hotel then provides an exemption, but usually this applies only on arrival and departure, and not in order for you to drive around the zone.

Parking outside the ZTL zones usually goes just fine in Bergamo. There are many parking garages there, and also spaces along the streets. You get a decent overview of available spaces with various apps that can be downloaded to your phone, or used via a web browser, such as Parkopedia. 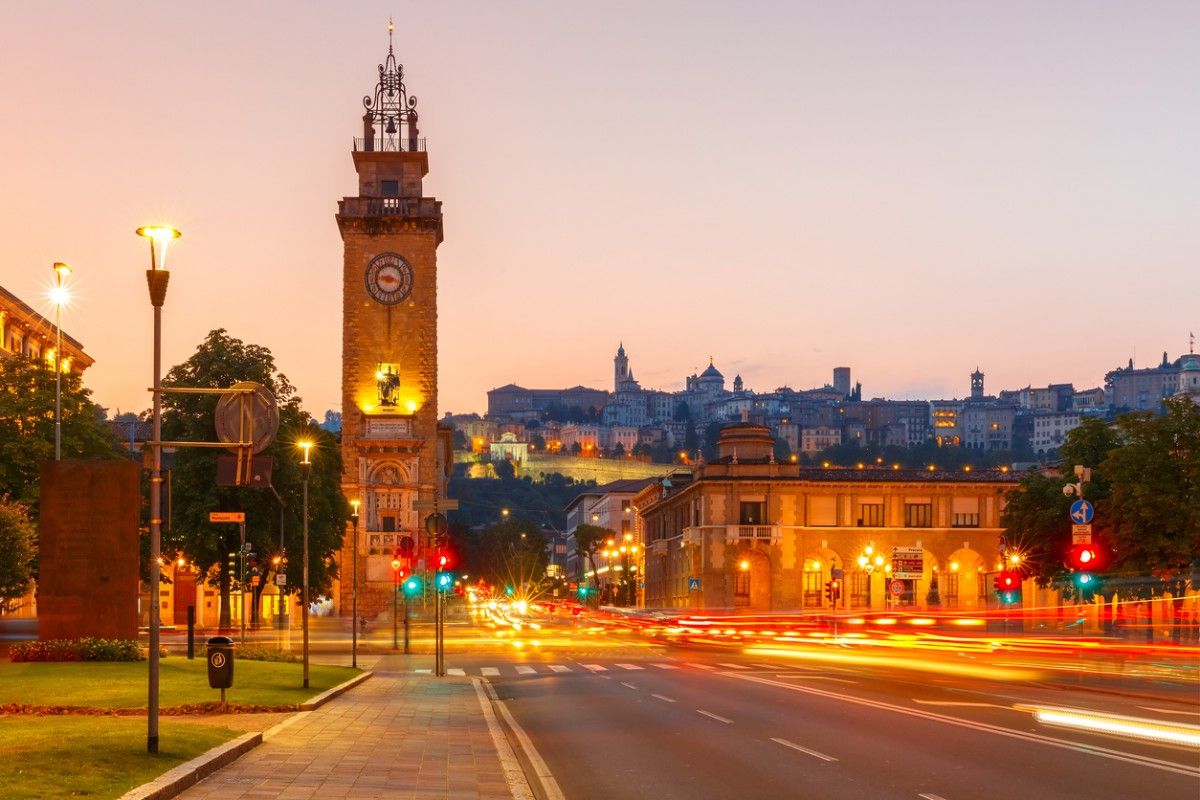 The traffic in Bergamo is relatively nice to drive in, but remember that Italians have a somewhat more stressful driving style than Norwegians.

Driving inside Bergamo is not difficult, but the streets can be narrow, and the driving style of most Italians is somewhat more stressful than we are used to. On the country roads that run between the towns and towns in the region there can be a good deal of traffic, including buses and trucks. Have patience, drive safely, and preferably a little defensively. Please note that there may be many cyclists on the country roads.