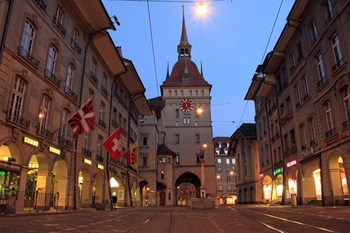 Bern is centrally located in the western part of Switzerland, and is the country’s capital.The city is located more than 500 meters above sea level, and the river Aare flows through the city. Bern has about 134,000 inhabitants (2011) – and is primarily an important administrative and commercial center.

Bern was founded in 1191 – and was, as such Zurich, “free national city” in the 1200s.Capital of the total federation Bern Switzerland has been since 1848. When the city had a few years earlier had its own university (1834).

Bern is a beautiful city, marked by a number of historic buildings in a mixture of French, German and Swiss problematic architectural tradition. A major landmark in the cityscape, and one of Bern’s landmarks,   is the great cathedral Berner Münster, which was begun in the 1400s.It is considered the most beautiful Baroque church in Switzerland. The cathedral is one of the oldest quarters of the Old City.

Another landmark is the tower “Zytglogge” which was built around 1200 in connection with what was then the western gate. It is also known for its “figure game” and its astronomical clock. Also two other medieval towers – Kafigturm and Holländerturm – are popular destinations.

Other historical buildings is the Great Parliament “Bundeshaus” from 1902 and “Erlacherhof” – built in 1747 as a private residence. Today the building houses, among other things localities of the city council. The city’s many bridges over the river Aare must also be mentioned. The oldest still in existence, is “Untertorbrucke” from 1490’s.

Around the Altstadt are a number of historic wells – some of them with designs from the 1600s. They are unique – and have been a major contributing factor to the whole of the old part of Bern is now on UNESCO’s World Heritage List

Otherwise Bern many interesting museums to offer – including “Zentrum Paul Klee” (opened in 2005) and dedicated to the world famous modernist painter Paul Klee. The city also has its own Einstein Museum. Albert Einstein lived in Bern when he made his famous formula E = mc ² in 1905. Einstein Museum is part of the larger Bern Historical Museum.

An attraction of a different kind is found just south of Bern, specifically in the mountains Gurten (864 m). From here there are magnificent views over both Bern and into the Jura Mountains and the Alps. On Gurten is both hotels, restaurants, observation tower and playground for children. In winter, there is also a variety of ski deals here – and in July of each year the popular music event Gurtenfestival. Gurten is accessible by foot or by cable car from Gurtenbahn suburb Wabern.

The nearest airport is Bern-Belp Airport, which is located 6 km southeast of the center of Bern.