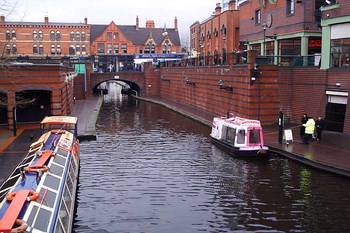 Birmingham is in the West Midlands region, in the western part of central England – 110 miles northwest of London. Birmingham is Britain’s second largest city (after London ), and has about 1 million inhabitants. If it is estimated metropolitan area, the population is increasing to 3.6 million (2010).

Birmingham is a major commercial, industrial and financial center, and is also known to be a popular exhibition and conventions. Birmingham is also famous for its many canals, and has nearly 60 miles of canals within the city limits.

Birmingham is a cosmopolitan city, and many of the inhabitants are from India, Pakistan or Ireland.The city’s parade on “St. Patrick’s Day” is the 3rd largest in the world (after New York and Dublin).

Millions of tourists visit Birmingham every year, and some of the most popular tourist attractions in the city include St. Martins Church from the 1200s, the public art gallery “Birmingham Museum & Art Gallery” – where such can see the works of Bellini and Rubens, the technological museum “Think Tank Birmingham” town hall from 1834 and “National Sealife Centre” – with its giant freshwater and saltwater aquariums.

In addition, Birmingham great shopping, and the Bullring shopping center is one of Europe’s largest. Many tourists also visit the chocolate factory Cadburrys in town – where you can get a guided tour.