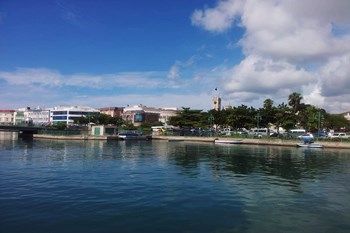 Bridgetown is the capital and largest city on the Caribbean island state of Barbados with a population of 98 511 (2012) inhabitants. The official language is English. Main export products are sugar, room and molasses. It is possible to visit the Rum Factory in Bridgetown and also get a taste.

The city is a major tourist destination and has a large cruise boat harbour. Broad Street, which runs past the parliament buildings in the Gothic Revival style and is open to the public, is the city’s main street with great shopping. Other important shopping streets Swan Street, Roebuck Street and Tudor Street.

Just outside the town is Pelican Village is known for its market where among other things, buy souvenirs and handicrafts. In 2011 the Bridge Town historic district UNESCO World Heritage Site, and there are many interesting buildings to visit. One of them is the Jewish synagogue and cemetery, and the Maria Church from 1827.

Barbados Museum is housed in the former British military prison and is the place to go whether to capture the island’s history: From indigenous to the arrival of Europeans and African slaves, emancipation of slaves, independence from the British, and recent history. It is an interactive children’s section.