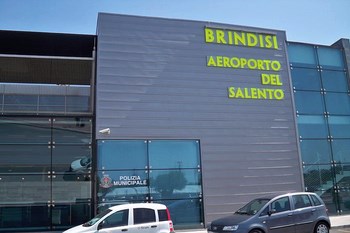 Brindisi Airport (BDS) is an international airport in southern Italy, located 3 km north of the center of the port city of Brindisi.The airport is often called in Italian “Aeroporto del Salento”.

The airport serves two million passengers a year (2011), and has both permanent and seasonal direct flights to and abroad. Airlines such as Air Berlin, Air One, Ryanair and EasyJet fly from here to such  Munich, Milan, Corfu, Paris, Brussels, London and Stockholm.

Brindisi Airport has been around since 1923, but served as a military airport until 2005.

Facilities at the airport include a few shops, bar / restaurant, vending machines with cold / hot beverages, information desk and ATM.

There are good public transport from the airport into the center of Brindisi, and you can choose between bus or taxi. If you want to rent a car in Brindisi, a number of international car hire offices at airport – including Avis, Europcar, Hertz and Sixt.

If you order the car before leaving, the car will be ready when you arrive at the airport.