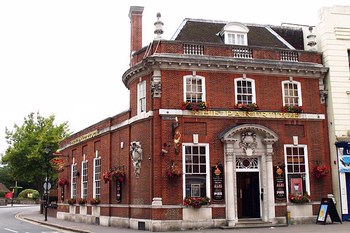 Bromley was originally an old market town, but is now a neighbourhood in the southeastern part of London. The center is located about 15 km southeast of the station Charing Cross Station. Although Bromley today that is incorporated in the capital, it has maintained a separate state. Its population is around 300,000 (2010).

There is good shopping in Bromley, both in the central pedestrian zone and a large shopping mall near this. Otherwise Bromley known for its numerous cultural institutions, including theaters Churchill Theatre and Bromley Little Theatre. Sharing premises with Churchill Theatre is the large Central Library – a library with an extensive multimedia services.

The main historical attraction in Bromley is the imposing church of St. Peter and St. Paul Church. It was destroyed in a bomb attack during the 2 World War, but has since been carefully restored.