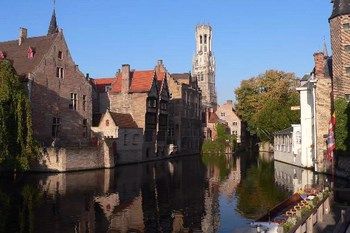 Bruges (120,000 inhabitants in 2011) is located in northwest Belgium, and is the capital of the province of West Flanders. The town is located 15 km from the North Sea, and channel connection with the coastal towns of Zeebrugge and Ostend and the port city of Gent.

Bruges was founded already in the year 865, and has many medieval buildings. The city has great tourism and is known for its quaint, historic town center – which also is a UNESCO World Heritage Site. In the old city’s ramparts, cobbled streets, large squares, canals and walls. Here you can also visit a number of attractions – including Gothic St. Sauveur Cathedral (built between 1200 to 1500’s) church “Onze-Lieve-Vrouwekerk” –   Its roots go back til1200 century. Inside the church’s statue of the “Madonna with Child” created by Michelangelo in the 1500s.

Bruges is otherwise a rich cultural scene with art museums and theaters, and is also known for its many annual festivals – including beer festival and film festival. In 2002 the city was named the European Capital of Culture.