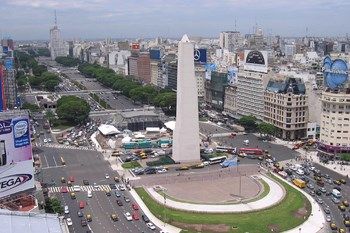 Buenos Aires is the capital of Argentina, located in South America. The city is geographically located on the east coast of Argentina –   the river Río de la Plata – which empties into the Atlantic Ocean. The Buenos Aires has 3 million people, while the metropolitan area has a total of 13 million inhabitants (2010).

Buenos Aires is Argentina’s economic, cultural and industrial center, and is also the country’s main seaport. From the port, the ferry service to such  Uruguay.The capital is known for its beautiful architecture and its international atmosphere, and also has a rich cultural life with museums, theaters, opera and galleries. Most major tourist attractions are located around the square “Plaza de Mayo” – where such For the old town hall from 1748 Cabildo, the Casa Rosada Government House in 1873 and the city’s cathedral.

Buenos Aires is also famous for being the world capital of tango, and there are several tango festivals throughout the year here.