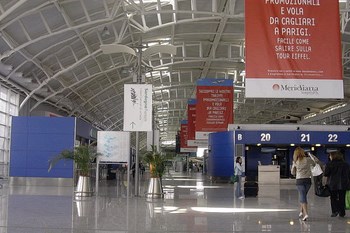 Cagliari Airport serves 3.7 million passengers a year (2011), and has direct flights to over 30 destinations in Norway and abroad. Airlines Ryanair, SAS, British Airways, EasyJet and Air Berlin flights from Cagliari Airport to such  Oslo, London, Madrid and Rome.

The airport opened in 1937 and has one terminal building. There are a lot of amenities for travelers in the terminal – including bar / café / restaurant, bank, post office, VIP lounge, chapel, shops, newsstand / bookstore and pharmacy. There is also internet access in the building.

There are no hotels at the airport, but there are several in the area.

To get from Cagliari airport and into the city center, one can take a taxi or bus. Should you prefer to rent a car, several car hire suppliers in its branches at the airport – including Avis Budget and Hertz.