Compare prices and find cheap car hire in Rome from well-known and local car hire companies. Insurances and unlimited mileage are included. Save up to 70% on car rental in Rome through us. 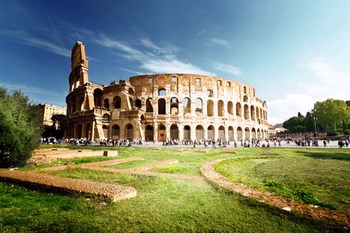 Rome is the capital of Italy, and is centrally located in the country – in the region of Lazio. Rome has about 2.7 million inhabitants (2011), and is the country’s administrative, cultural and religious center. In Rome is also located vatican city, which is controlled by the Pope, and is the spiritual and adminstrative center of the Roman Catholic Church.

Rome is located on both sides of the River Tevere (Tiber) – about 25 km from the Mediterranean coast. The city is an important national and international transport hub.

The city has great tourism and is known for its many archaeological and art historical treasures. In addition, Rome has many museums and art galleries – among others. National Museum of Modern Art. The town also has 400 churches, opera houses as well as a rich theatre and cultural life.

Some world-famous attractions in Rome include: Vatican City with St. Peter’s Basilica, St. Peter’s Square and the Vatican Museums, the impressive amphitheatre “Colosseum”from the year 80 e. Kr., the famous fountain “Fontana di Trevi” from 1766, the archaeological site “Roman Forum” – with ruins from the Roman era, the building “Pantheon” from the year 125 e. Kr. as well as “Palazzo Venezia” – a 15th-century palace that is today a museum with exhibitions of medieval and Renaissance arts and crafts.

Even if you have plenty of sights and things to do in Rome, a trip out into the surrounding area is certainly to recommend. With car hire, you take a short time to reach many beautiful and exciting villages, beautiful landscapes, archaeological gems, and not least lovely beaches. Here are some of the best excursions from Rome. 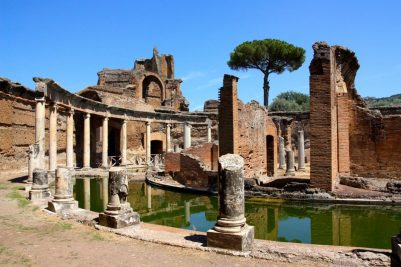 In the city of Tivoli you will find Villa Adriana – the holiday palace of the Roman emperor Hadrian.

The city of Tivoli and Villa Adriana

Tivoli gardens beautifully up the hills, with stunning views of the typical Italian countryside. The small town is especially known for its many sights associated with roman times.

Here you will find the remains of Villa Adriana, the holiday palace of the Roman emperor Hadrian. Nearby is Villa d’Este, built in the 16th century, famous for its magnificent architecture and very beautiful garden. Both villas are a UNESCO World Heritage Site.

Also stop by Villa Gregoriana and the Temple of Tempio di Vesta, located on top of the hill that rises above Tivoli Gardens, or some of the other ruins that also date back to the Roman era. 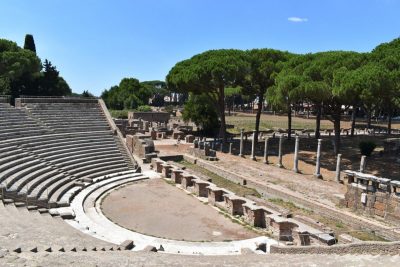 A well-preserved theatre from the Roman Empire.

Ostia Antica is believed to have been one of the Roman Empire’s first colonies, and eventually served as a port city for the Romans. The city was constantly developed, especially during the reign of Julius Caesar, reaching about 100,000 inhabitants in the third century. Today Ostia Antica is an archaeological excavation, known for accommodate very well preserved buildings, mosaics and frescoes. Here you get a very good impression of what life was like in the heyday of the Roman Empire.

Beaches on the coast

Enjoy the beaches by the coast and add lunch to the village nearby.

It is no more than about 25 kilometers in line from Rome’s center to the beautiful coast of the Tyrrhenian Sea. Here you will find many good beaches that are adjacent to pleasant small towns and villages. Several of the places also have sights that alone are worth the trip. Here are three of the best: 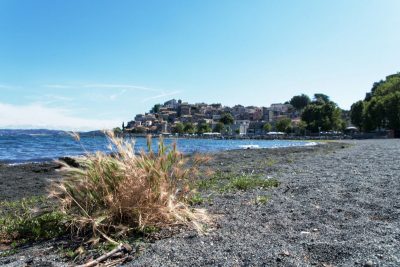 Around lake Lago di Bracciano there are many pleasant small and old villages.

If you drive an hour north from Rome, you will reach Lake Bracciano. Around this there are many pleasant small and old villages. Take, for example, the medieval Old Town in Anguillara Sabazia. Then drive a few kilometres west to Castello Orsini-Odesalchi, the impressive 15th-century castle where Tom Cruise and Katie Holmes married in 2006. 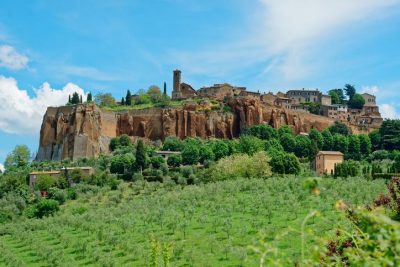 The settlement extends dramatically up the hill, with an acropolis at the top.

This picturesque city is located some distance north of Rome. The settlement stretches dramatically up a hill, with an acropolis at the top (from ancient Greek – “the city at the top”), and a well-preserved city wall that surrounds the city centre.

In Orvieto you will find many sights, including an impressive cathedral built by Pope Nicholas IV in the late 13th century, a papal palace from about the same era, an underground labyrinth and tunnel system, the 15th-century Fortezza dell’Albornoz fort, as well as many archaeological excavations. There are also pleasant restaurants, with local specialties on the menu, and fine wines produced in the area around the city.

The traffic in Rome is probably a little more hectic than you’re probably used to from home. The cars tend to drive close to each other, and the Romans are not afraid to use the car horn. To make it easier to concentrate on traffic, we recommend that you have a rental car with satellite navigation on board. Navigation also helps to avoid driving errors, for example, into the areas where only taxis and buses are allowed to drive (ZTL – Zona Traffico Limitato). Note that the ZTL zones have different rules. Some zones are closed to regular passenger cars only during rush hour, while others are closed to cars with high exhaust emissions.

Traffic at the Colosseum at night.

In the streets there are two different markings showing where you can park. White stripes mean you park for free, while blue stripes mean you have to pay a fee on vending machines that stand on the sidewalks. You can pay with banknotes, coins or cards, and get a receipt that must be placed clearly visible on the dashboard. There are also many parking garages in the city, and these are normally well marked with signs. It’s easy to find indications of where the parking garages are if the rental car has navigation, or on the map app on your smartphone. 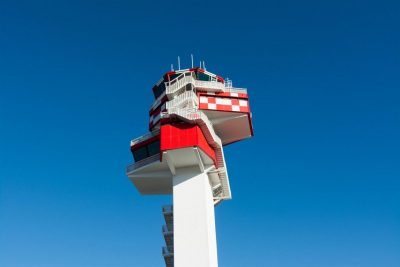 The control tower at an airport in Rome.

Virtually everyone who flies to Rome from other cities in Europe lands at Fiumicino Airport, also called Leonardo da Vinci Airport. The exception is the occasionally chartered aircraft, as well as some of the low-cost airlines, which land at Ciampino Airport.

The major car hire companies, such as Budget, Sixt, Europcar, Avis, Hertz, as well as several Italian rental companies, are well represented at the airport. You can also easily and quickly reach the city centre by train, bus or taxi.