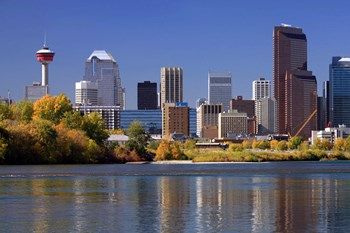 Calgary is located in south-western Canada, specifically in the southern part of the province of Alberta. The city lies on the River “Bow River” – near the foothills of the Rocky Mountains. Calgary has about 1.1 million inhabitants (2009), and is an important commercial and financial center. In addition, the city is a major gateway.

Calgary is perhaps best known for being a popular winter destination after the city hosted the Winter Olympics in 1988. The city is also famous for its annual festival “Calgary Stampede” – which is North America’s largest rodeo.

The downtown Calgary is characterized by modern skyscrapers, and a well-known landmark is the 190 meter high building “Calgary Tower”. It is popular for tourists to take a trip up to the observation deck of the building, and thus get a panoramic view of the city.

Other tourist attractions include the Calgary Art Museum “Glenbow Museum”, Banff National Park in the Rocky Mountains and the zoo “Calgary Zoo” with its botanical garden.

Calgary was in 2007 ranked as the world’s cleanest city by Forbes Magazine.