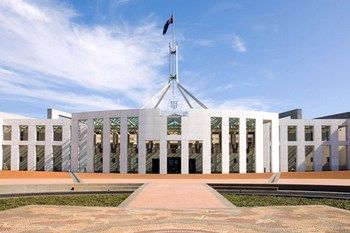 Canberra is the capital of Australia.With a population of 367,752 inhabitants (2012) it is Australia’s largest inland. It is located at the southeast of the continent, 281 km southwest of Sydney and 650 kilometers northeast of Melbourne.

Canberra was designated the national capital in 1908 as a compromise between Sydney and Melbourne is Australia’s two largest cities. It differs from other Australian cities because it was built from scratch as a planned city. Construction was started in 1913 by Chicago architects Walter Burley Griffin and Marion Mahony Griffin.Canberra has the lowest unemployment in Australia since that is where most public institutions are located. The average age is also lower than elsewhere in Australia, and the economy is very good and stable. Although Canberra also has many attractions and a good nightlife, it is common to go to Sydney on the weekend.

The design of the city was affected by Haveby movement and has large areas of natural vegetation and parks. Because of this, called the Canberra bush capital. Canberra is located not far from the Namadgi National Park and Tidbinbilla Nature Reserve. It is famous for its flower display from mid-September to early October in which more than a million flowers are to celebrate the Australian spring. Since the south in Australia, the four seasons.

Canberra International Airport is located 8 km northwest of the city. Most international flights go via Sydney or Melbourne.