Compare prices and find cheap car hire in Cape Town from well-known and local car hire companies. Insurances and unlimited mileage are included. Save up to 70% on car rentals in Cape Town through us. 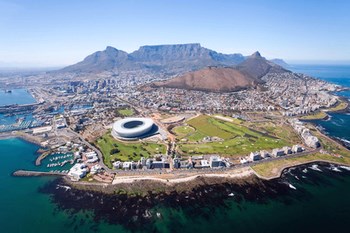 Cape Town (Afrikaans: Kaapstad) is the capital of the South African province of Western Cape. The town is located at Table Bay, a little north of Cape Good Hope. Around the city there are several high mountains – among others. Lion’s Head, Devil’s Peak and the nearly 1100-meter-high Table Mountain. In the bay outside the city lies the former prison island of Robben Island, known as the place where Nelson Mandela was imprisoned for a number of years. The population of Cape Town itself is around 850,000 (2010), but if the entire metropolitan area is included, the population rises to almost 3.5 million. With that, Cape Town is Africa’s third largest metropolis.

Cape Town is one of South Africa’s most important export ports. Here, among other things, it is dispatched. gold, diamonds and fruit. Otherwise, the city has an extensive and varied industry – as well as a large shipyard. In recent years, tourism has also become an important business route.

Cape Town emerged in the 17th century as an important provisioning station for Dutch ships on their way to India, and also became a hub for immigrants. Around the year 1800, the city became obsessed with the English. Cape Town has had city status since 1840. After years of protest against the South African apartheid regime, in the 1980s the city was a center of rebellion and demonstrations.

Today’s Cape Town is a modern metropolis with wide, streets and avenues – as well as a number of large parks. However, some historical memorials have been preserved – and they are among the city’s main attractions. This applies to, among other things, the Dutch cast from around 1670 (Castle of Good Hope). It is now home to a military museum. Also Slave Lodge (Cultural History Museum) is well worth a visit. It is housed in a building from 1679 – which was originally used to “store” slaves. Later, among other things, the The Supreme Court was here. Today there is a historical museum in the building – also with departments for ceramics, tools and toys. Also, the church of Groote Kerk from 1836 is considered one of Cape Town’s sights.

Most tourists in Cape Town will make a visit to the prison island of Robben Island. It is located twelve kilometres outside the city and has been used as a prison since the 17th century. This is where Peace Prize laureate Nelson Mandela was imprisoned for 27 years. Since 1997, Robben Island has been a museum. There are ferries to the island from the port of Cape Town.

Otherwise, a visit to the top of Table Mountain is a spectacular experience. You can either walk on foot or use a gondola. 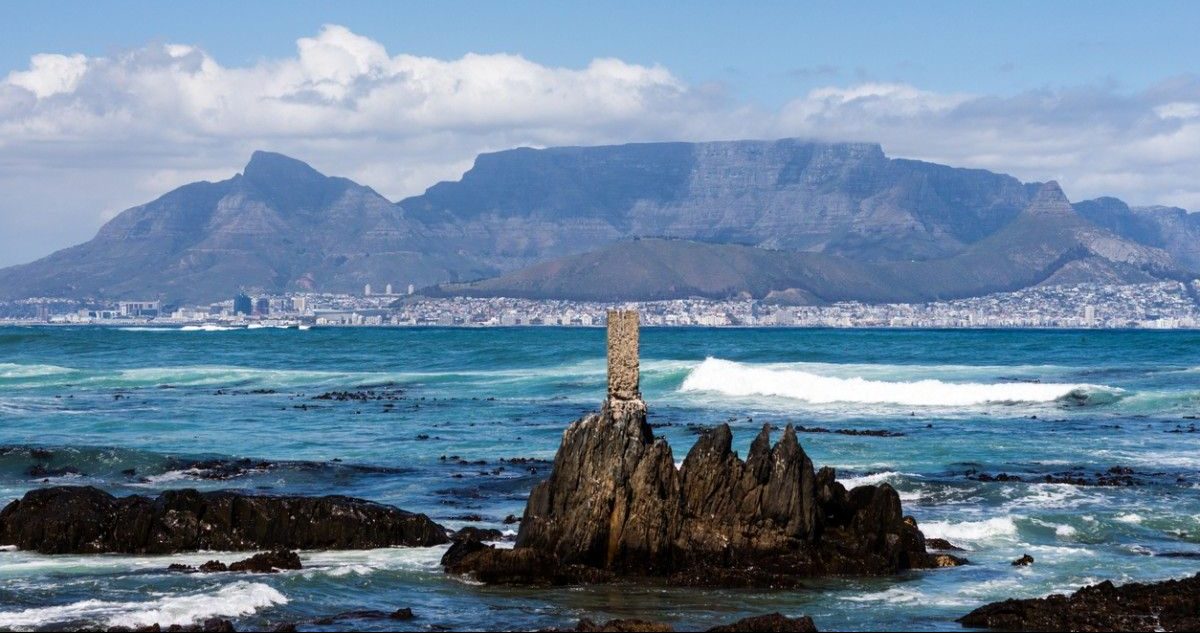 The prison island of Robben Island where Nelson Mandela was imprisoned for 27 years.

The area around Cape Town offers stark contrasts. On the coast you will experience beautiful beaches, picturesque small towns, beautiful sea, and a teeming wildlife that includes whales, penguins and dolphins. Inland you have the large wine areas, before you reach the mountain range that spreads around the Cap area. There you meet lions and elephants in a savannah and desert landscape that is unique. Here are some suggestions for the best driving cars with car hire. 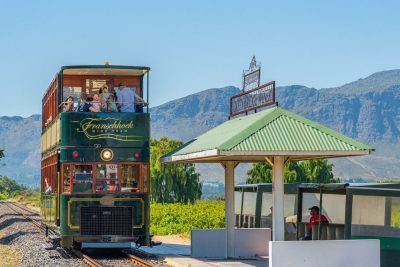 The Franschhoek Wine Tram takes you to the various vineyards.

The Winelands – Take the tram between the vineyards

One of the best excursions from Cape Town is to visit The Winelands, and then explore the different vineyards with The Franschhoek Wine Tram that meanders through the valley. These are essentially 8 different tram routes, where the trams themselves are a sight in themselves. They are old and venerable, and on two floors, so passengers get to enjoy the view of the landscape between the farms. Start and stop is in the town of Franschhoek, where you can easily park your rental car next to the trams station building. The tours of the vineyards are very popular and should be booked in advance. If you are interested in wine, consider also stopping by Stellenbosch, which is a small detour on the road to Franschhoek. 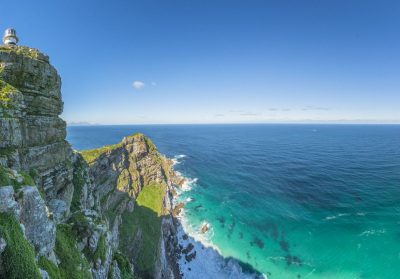 There’s a cable car up to the old lighthouse at Cape Point. Here you can enjoy the beautiful view.

Just a few kilometres away from each other, these two points are among the Cape Peninsula’s most popular sights. Here you can get one of your best nature experiences ever. It is especially beautiful at Cape Point, which rises above the wild sea on a rock cliff. There, there is a cable car up to the old lighthouse, where the view can be described as dazzling. On the road from Cape Town to the two vantage points, you pass simons town,among others. In this city you get close to one of South Africa’s penguin colonies.

The Karoo – Safari only two hours from Cape Town

The area called The Karoo is somewhat diffusely delineated, but most people think it’s about the landscape that starts behind the mountains that surround Cape Town. This partial desert offers many amazing nature experiences and is one of the closest areas you can travel to to see wild animals. For example, in Aquila Private Game Reserve,do this. In that park you get to see all the “big five”, which are lions, elephants, rhinos, leopard and buffalo. In The Karoo there are also many odd small towns that can be fun to stop by, there are ostrich farms there, you’ll find activity centres with all kinds of extreme sports,as well as several safari parks.

Two Cape Hartebeest in The Karoo.

Located north of Cape Town, this fishing village is considered one of the continent’s oldest. It is also among the most beautiful, and one of the country’s most popular tourist destinations. Here you can spend the night in pleasant, small white-painted cottages,and visit several wonderful seafood restaurants. In the area you will find lovely beaches with chalky white sand, you can see whales and dolphins in the sea outside, and there is a teeming bird life here with over 250 different species to spot. There are many activities to get between meals, such as sea kayaking,fishing from land or boat, diving, lobster hunting,and more.

Paternoster with its chalky white beaches. 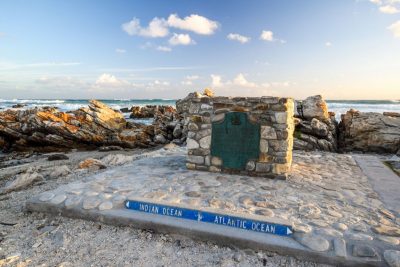 Cape Agulhas is the southernmost point of the continent.

Many mistakenly believe that either Cape Point, or cape the good hope, is the continent’s southernmost point. That title belongs instead to Cape Agulhas, which is an odd just outside the city of the same name (Agulhas). Here, the Atlantic ocean and the Indian Oceanmeet , in what is one of the most challenging waters for seafarers to round Africa. Among the highlights of Agulhas is the old lighthouse that stands on the headland. This is South Africa’s oldest of its kind, and those who walk up the stairs to the tower will have an unforgettable view. Just beyond the south, there is a shipwreck that should also be visited if you stop by. Also consider having a men’s meal at one of the many good restaurants in Agulhas, where oysters and local white wine are among the specialties. 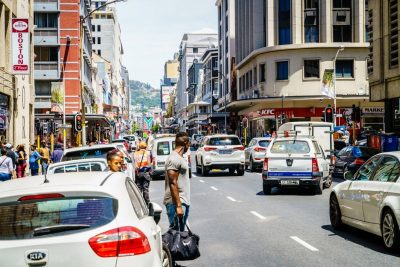 Traffic in the center of Cape Town.

Finding parking space in Cape Town is not difficult, and especially not if you prefer to leave the rental car in a place where there is security. If you are going to park the streets, you will usually have to pay a fee on vending machines that are on the sidewalks. Keep in mind that the fines are high if you mispark, parking over the time you have paid for, and the like.

If the road is marked with a yellow line on the side you would otherwise park, this means that you are only allowed to stop to, for example, drop passengers on or off. A red line means you are not allowed to stop at all.

The main thing to keep in mind when renting a car in South Africa is that here you have to drive on the left side of the road. It may pay to make a routine at first, such as consistently focusing on the start of the drive by getting behind another car. Also note that the windscreen wipers and directional detector are also on the opposite side of the car’s cockpit.

Pay extra attention to traffic, and especially outside the cities. Unfortunately, tourists are robbed if they stop to help others (fake accidents). Fake cops who rob driving are also something that occurs occasionally. If you are going out to the countryside, you must also pay extra attention to the fact that animals may get in the way. 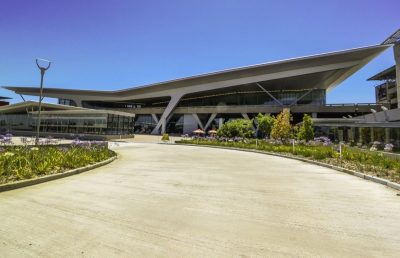 The international airport in Cape Town is the third largest in Africa, serving over 10 million passengers each year. It has two terminals, one for domestic flights and one for international routes. However, both terminals are connected and you arrive and leave the airport through the central terminal building anyway. In the square outside the main entrance you will find all the car hire companies’ counters and offices. The parking spaces for their cars are right next door.

As of today there are 9 car rental companies operating at the airport in Cape Town. These include Avis, Hertz, Europcar and Thrifty, as well as several local companies.