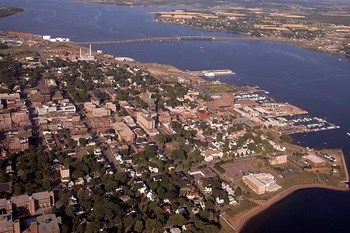 Charlottetown is a Canadian city and the capital of the province of Prince Edward Island. The city has a population of 34,562 inhabitants (2011).

Charlottetown is a popular destination in eastern Canada, particularly for tourists from USA and elsewhere in Canada. The city center contains many beautiful houses and buildings from the Victorian era. A new cruise terminal is being built, and the hope is that it will draw more visitors to the city.   It’s nice to go hiking country promenade. The city also has a lot to offer for those who enjoy golf, for example, a course at The Links at Crow Bush Cove. It has a rich cultural life with theatre and concerts.

Charlottetown is known for a very important historical event, and it was here that the Canadian confederation was first discussed in 1864.

Charlottetown Festival held during the summer months are becoming very popular due to the fact that Canada’s oldest and most popular musicals appear here, namely Anne of Green Gables. The musical is based on the Prince Edward Islands great author, Lucy Maud Montgomery, books.

The city is Charlottetown oil power plants of 112 MW, which is the province’s most powerful plants.